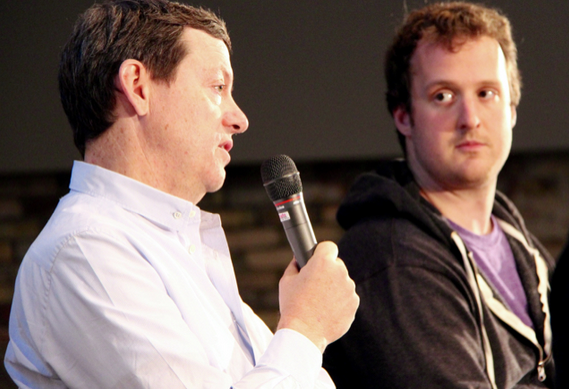 Whenever they met in New York, they would go for long walks, often on the High Line in Manhattan. When they’d get together in Waterloo, they’d drive out to the river for a stroll along its banks. It’s the type of thing anyone does in the early stages of a relationship – and venture capitalists and entrepreneurs are no exception.

In this case, we’re talking about the courtship of Fred Wilson, co-founder of New York-based Union Square Ventures, and Ted Livingston, co-founder and CEO of Kik, the Waterloo-based mobile chat company. Wilson, a pre-eminent VC and blogger, is deeply invested in Kik.

Fred and Ted, as they were billed, appeared this week before a capacity crowd at Waterloo Region’s Tannery Event Centre, to take part in an hour-long chat with Mike Kirkup, Director of the University of Waterloo’s Velocity startup program. Livingston started Kik when he was a UW student living in the Velocity residence, and at age 23, donated a whopping $1 million to the program in 2011 to help fund other student-led startups.

Among many insights shared during the wide-ranging talk was that it takes time and effort to build an effective investor-investee relationship.

“It took Ted and I a while to figure out how to work with each other,” Wilson said. “It wasn’t until we collectively made the commitment to start spending quality time together that things started to click.”