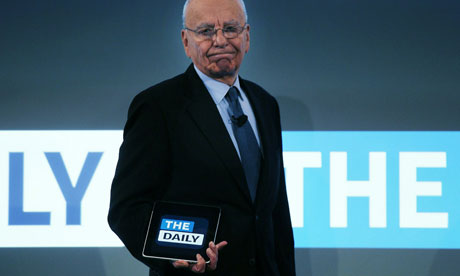 We were sad to see The Daily collapse beneath its own weight yesterday. Not so much because it was a great newspaper—it was decent, but not outstanding—but because it was a symbol. The Daily represented the first real foray of any traditional media company into an all-digital world. So its demise was more than an iPad app shuttering; it was the hopes of all tablet-exclusive publications—past, present, and future—having their last breath of hope sucked from their lungs.

The Daily garnered a lot of attention when it first launched. The News Corp. product had Apple’s support and, visually, it was stunning. Especially for early 2011, when developers were still shaky about tablets being a true market category and not just a fad, The Daily was positively inspiring.

But then the hype died. No one really talked about it after the first issue. That is, until it was revealed earlier this year that The Daily was seriously struggling. The newspaper, which tech editor Peter Ha described as a startup in a Gizmodo confessional, had to slash 29% of its staff.

Turns out, The Daily had “only” 100,000 subscribers. (That’s actually a solid number, but we’ll return to it later). At a $40 annual subscription rate, revenue was “just” $4 million. (Again, this wasn’t a necessarily bad number. It only looked bad because The Daily was costing more than $20 million to run annually.)

Now that the publication is six feet under, it’s garnered hype again. I’ve seen several people theorize already why The Daily died and how it could have handled things better. Cameron Yuill, CEO of AdGent Digital, suggested a few things the paper could have done in a ReadWrite article: operate a leaner editorial team and leverage syndicated content from News Corp.’s portfolio of media properties, among other things.

But Cameron also said that closing The Daily was “the only sensible decision” News Corp. could have made. This strikes a stark contrast to the opinion of Jordan Kurzweil, co-CEO of Independnent Content. In GigaOM, he wrote very bluntly that “closing The Daily was a mistake. It should have been saved.” Jordan argues that The Daily was “ahead-of-the-curve with a grand (and correct) vision” but suffered from “flawed execution, too much money spent on too many salaries, and a strange unwillingness to change the businesses for the better and stick with it.”

According to Jordan, News Corp. had the opportunity to build and define how the next generation got its news. The Daily’s 100,000 paying subscribers (at a 98% renew rate) represented a “great core base” with “significant cash flow.” Unfortunately, execution was plagued with mistakes: only publishing news once per day, content that was in no way shareable, and an overly linear experience. It also—and we would argue this was the most fatal error within News Corp.’s control—spent far too much money on itself.

Okay. So that’s The Daily. It clearly had its own set of problems. But others are struggling, like Huffington (which went from paid to free after a month of no one subscribing), and pretty much every other digital publication that isn’t just an app extension of a print or web-based media property. There has to be more to it, right? There is.

The big problem here that no one seems to mention is Apple. The world’s largest company loves keeping things simple, minimalistic, and streamlined. But on occasion this results in unnecessary compromises that come at the expense of other companies trying to benefit Apple via its own ecosystem.

What are we talking about, exactly? Apple’s 30% cut for apps. When an app sells for dollar, Apple snags 30 cents. It’s the price developers pay to be a part of the company’s ecosystem. And, while perhaps a little high, it’s ultimately fair in most respects.

But what about for publishers? Why are newspapers and magazines on Newsstand bundled into the same agreement as apps on the App Store? It doesn’t make sense on many levels.

When it comes to content and the internet, the word “free” often comes to mind. People expect to be able to consume most, if not all, content for free. This is the first and biggest obstacle all media companies going digital face today. And Apple is making it virtually impossible to overcome this on the iPad.

See, consumers who willingly pay for print newspapers and magazines—and there are still millions upon millions of them—were estactic when the iPad came out. They could soon subscribe to digital editions of their favourite publications for much cheaper because the immense cost of mass printing was eliminated. Only there was a new immense cost that consumers weren’t aware of: the Apple cut.

When Apple backed The Daily, it still insisted on 30%. That is a back-breaking number for pretty much any newspaper. The cost of developing a digital publication isn’t inherently cheaper than developing a print one—you still need journalists, editors, and designers. And now you need programmers too. So the only salient cost savings is on print. Apple, in essence, has become the printing press, effectively preventing publications who want a digital edition to not save any money.

The end result, then, is obvious: with cost of production the same, the cost of the end product is the same. But because it’s on a digital platform, people don’t buy it. They think it’s overpriced and that the publication is trying to scam them for a free ride. So the media property loses money on its digital version, which then bleeds into its already-weakened print version. Or, if it’s digital-only a la The Daily, it simply shutters.

There are plenty of examples of companies charging for their digital newspapers and magazines at or close to print rates—$4.99 for an issue of MoneySense (50 cents cheaper than print), or $19.99 for a year of Canadian Business (about $2 cheaper annually). Some, like Esquire, actually cost more on the iPad than in print.

Yes, it’s true that the gap between The Daily’s $25 million annual costs and its $4 million annual revenue could not have been closed even if Apple took a 0% cut. But an efficiently run publication could thrive on the iPad, and could sell for cheaper than print, if only Apple stepped back and realized that Newsstand publications are not apps and should not be treated as such.

Something like 15% would make a world of difference to most media companies, whose profit margins are typically razor thin at the best of times. For many, it would be the difference between viability and hopelessness.

It would benefit Apple greatly to have a strong Newsstand. Currently, it’s desolate and mired with buggy “apps” (because publications can’t afford proper development with a 30% hand in their wallet). Imagine the potential for the media industry—and for Apple—if digital editions and digital-only publications actually stood a chance.

One day, we hope that tablets represent a window of glorious opportunity for media. Currently, they’re just a death trap.