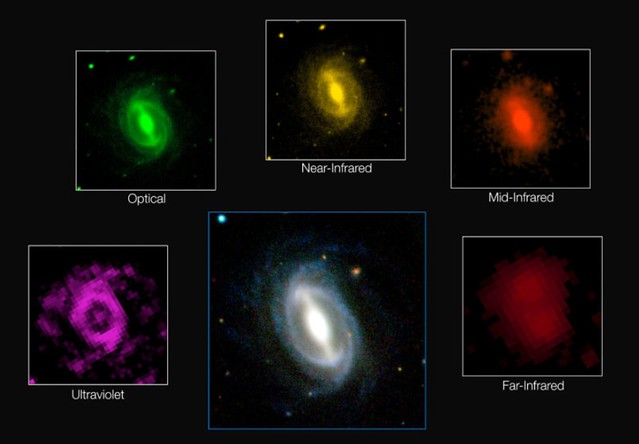 “The Universe is slowly dying.”

This is the grim conclusion drawn from an international team of astronomers studying more than 200,000 galaxies, who measured the energy generated within a large portion of space with newfound precision.

Their research confirms that the energy produced in a section of the Universe today “is only about half what it was two billion years ago” and find that this fading is occurring across all wavelengths.

“We used as many space and ground-based telescopes as we could get our hands on to measure the energy output of over 200,000 galaxies across as broad a wavelength range as possible,” says Simon Driver (ICRAR, The University of Western Australia), who heads the large GAMA team.

This dataset will help scientists to better understand how different types of galaxies form and evolve, researchers say.

Quoth the paper, “Charting the Slow Death of the Universe“:

All the energy in the Universe was created in the Big Bang, with some portion locked up as mass. Stars shine by converting mass back into energy, as described by Einstein’s famous equation E=mc2. The GAMA study sets out to map and model all of the energy generated within a large volume of space today and at different times in the past. The fact that the Universe is slowly fading has been known since the late 1990s, but this work shows that it is happening across all wavelengths from the ultraviolet to the infrared, representing the most comprehensive assessment of the energy output of the nearby Universe.

“While most of the energy sloshing around in the Universe arose in the aftermath of the Big Bang, additional energy is constantly being generated by stars as they fuse elements like hydrogen and helium together,” Driver says. “This new energy is either absorbed by dust as it travels through the host galaxy, or escapes into intergalactic space and travels until it hits something, such as another star, a planet, or, very occasionally, a telescope mirror.”

The team of researchers hope to expand the work to map energy production over the entire history of the universe.

The fact that the Universe is slowly fading has been known since the late 1990s, but this work shows that it is happening across all wavelengths from the ultraviolet to the infrared, representing the most comprehensive assessment of the energy output of the nearby Universe.

“The Universe will decline from here on in, sliding gently into old age. The Universe has basically sat down on the sofa, pulled up a blanket and is about to nod off for an eternal doze,” concludes Simon Driver.