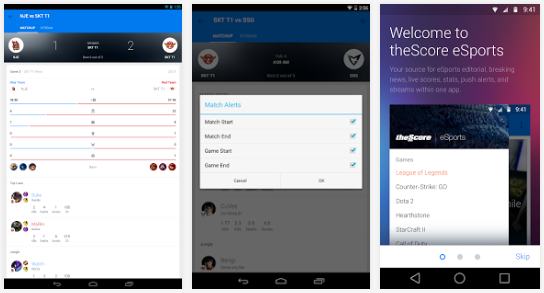 The popularity of e-sports continues to show explosive growth, with its fan base now comparable to that of mainstream sports leagues. It is estimated that more than 71 million people now watch e-sports around the world, with viewing figures of competitive e-sports contests now surpassing those of some major traditional sporting events. By 2018, total e-sports viewing hours are forecast to reach 6.6 billion worldwide.

“The many millions of eSports fans worldwide deserve a first-class, professionally supported mobile app, and that’s exactly what theScore eSports gives them,” said John Levy, Founder and CEO of theScore. “In our view, eSports should be treated as a fully-fledged sport and theScore eSports mirrors the same dedicated mobile-first approach we’ve taken with our flagship mobile sports platform ‘theScore’ by combining the core foundations that run through our company – a best-in-class development team working in tandem with an industry-leading mobile newsroom.”