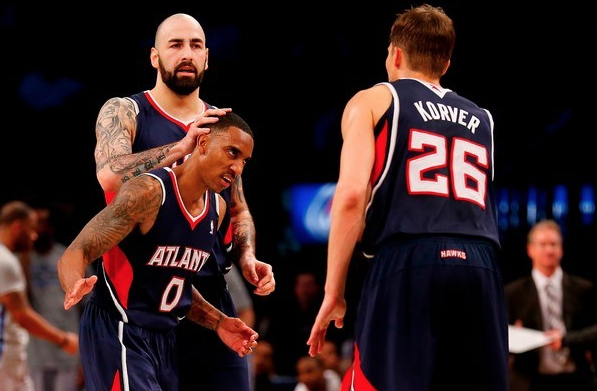 Tinder and the Atlanta Hawks collaborated for a “Swipe Right Night” promotion Wednesday night, and it was everything you thought it would be.

The cheeky promo represented yet another example of the increasing intersection between technology and sports. Countless apps today target either the athlete or the sports-viewing fan, while startups north of the border have aggressively plotted out business ideas focused on Canada’s national game.

It was the Atlanta Hawks who first approached West Hollywood-based Tinder for the idea. The night ended up generating serious buzz on Twitter as both “Hawks” and “Tinder” ended up trending on Twitter in Atlanta, while fans used the hashtag #SwipeRightATL.

Since Tinder is a location-based dating app, the chances of meeting fellow Hawks fans were assumingly higher than normal. The team gave fans designated locations at Philips Arena that Tinder users could use to meet their matches.

According to Grantland’s Rembert Browne, it was Hawks CEO Steve Koonin who wanted to do the promotion. Koonin and his wife had their first date at an Atlanta Braves baseball game, and he wanted to spread to love to the tech-savvy generation, evidently. The Hawks aren’t doing too shabby in the NBA’s standing either, so the idea had all the makings for an interesting night.

“Hawks games have always been a great place to meet fun and vibrant people and we think ‘Swipe Right Night’ will take that to a whole new level,” Koonin declared in a hype-up release prior to the game.

Disappoint, it did not.

Male fans came ready to win over their heart’s desire, while the Hawks provided all the accessories that fans needed to in their quest for love.

The face of a man who knew exactly what he was doing, and succeeded. RT @JarydWilson preps for #SwipeRightATL Night pic.twitter.com/tMdSwVWPWz

Unfortunately for other fans, some experienced embarrassing “technical difficulties.”

Bleacher Report called Swipe Right Night a “strange and beautiful night,” as sparks flew between fans of different ages and backgrounds. Several fans excitedly wrote “She swiped Right!!” while others predictably had fun with the event on Twitter.