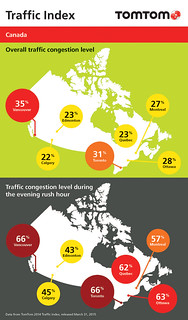 TomTom (TOM2) today released its 5th annual Traffic Index, the most accurate barometer of traffic congestion in over 200 cities worldwide.

In addition to revealing rising congestion levels around the globe, for the first time, the Index took an in-depth look at the true impact of rush hour traffic on the work week, uncovering that evening rush hour nearly doubles the journey time for car commuters in Canada’sbusiest cities.

In Toronto, Vancouver and Montreal, the average commuter loses 84 hours a year being delayed in traffic while the average time lost to traffic across the country is almost 79 hours.

Additional highlights of the 2014 study include:

The high levels of congestion are due in part to the traditional workweek, giving people no choice but to all be on the road network at the exact same time. By adopting more flexible schedules, individuals save travel time and rush hour congestion can be reduced overall.

“TomTom’s mission is to reduce traffic congestion for everyone,” said Jocelyn Vigreux, President of TomTom, Inc.. “Road authorities and local governments can use TomTom’s traffic data to better manage traffic flow during the rush hour. We can help businesses plan smarter working hours to help their employees avoid travelling during rush hour. And we give drivers the real-time traffic information and smart routing they need to avoid congested roads and get there faster.”

Top seven most congested cities in Canada ranked by overall congestion level in 2014:

To find out more information on the Traffic Index please visit: www.tomtom.com/trafficindex.