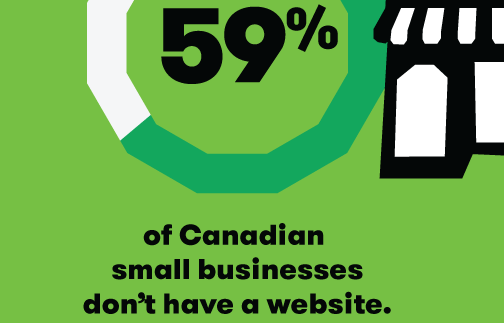 Most very small businesses aren’t fully plugged into the Internet, according to a landmark global survey, with 59 per cent reporting they don’t have their own website.

In Canada, very small businesses were exactly in line with the global statistics with 59 per cent saying they did not have a website, according to research commissioned by GoDaddy.

A RedShift Research survey of companies with five workers or fewer in Canada found 41 per cent of respondents without a website said they viewed their company as just too small to warrant a website.

“While many very small businesses in Canada are not online—and don’t have plans to be—the lack of a website puts them at a competitive disadvantage,” said Jill Schoolenberg, Vice President of GoDaddy Canada. “No business is too small to benefit from a website, and this study shows companies that do go online are more optimistic about their future and attracting new customers.”

According to the research, a major wave of very small businesses will be taking full advantage of the Internet soon: 33 per cent report they intend to create their own website within the next two years.

Competition is a key motivator in creating a website: 77 per cent of Canadian small business owners who already own a website feel they have a competitive advantage over those without.

There are over 200 million small businesses in the world, but for many, making the leap to have their own website is challenging: many survey respondents said they didn’t have the time, money or expertise to create a website. In Canada, 41% said they viewed their company as just too small to warrant one, 6% higher than the global average; 21% said they don’t have the time to create one; 20% reported that they couldn’t afford it; and 19% said it was beyond their technical expertise.