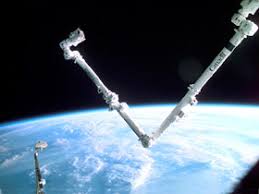 Canadians have been proud of the Canadarm for years. The robotic arm, over 50 feet in length, has been an essential component of Space Shuttle missions since 1981, and will continue to be used on the International Space Station until that facility is decommissioned.

Now, a Toronto company has been awarded a contract from the Canadian Space Agency to build the next Canadarm. The form and function are different; instead of being a massive arm built for zero-gravity purposes, this new arm will be much shorter and is intended for use on a Moon or Mars rover potentially launching in 2012.

The new arm, built by Engineering Services Inc., is being built under a $3 million contract from the CSA. The CSA spoke to the CBC about what this new arm means:

“The prototypes that will be built by ESI under this contract will build upon that legacy to ensure that Canada will remain a sought-after partner for future exploration missions to the Moon and Mars,” said Steve MacLean, president of the space agency, in a statement.
…

The space agency announced in September that such a rover prototype will be built by MacDonald Dettwiler and Associates, headquartered in Richmond, B.C., to test Canadian space technology on Earth under conditions that simulate a space mission.

However, CSA spokeswoman Julie Simard said the new arm will be designed to attach to any rover, not just the MDA rover.

For more information on Engineering Services Inc., including their new arm, visit their website here.