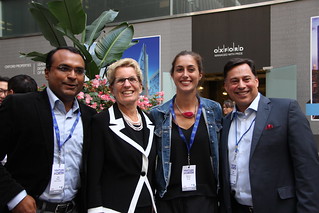 In the midst of Toronto International Film Festival (TIFF) festivities, tech is drawing its own Californian crowd.

The C100, a network of successful Canadians living in Silicon Valley, held its inaugural Startup Challenge on Tuesday evening at MaRS, showcasing the Toronto-Waterloo startup ecosystem.

The challenge, part of the two-day Venture North conference, drew in a crowd of more than 150, as seven Toronto-Waterloo startups took the stage to compete for $15,000 in cash.

Taking home the big cheque was Bridgit, a construction communication platform, which got its start in Toronto before moving to Waterloo Region.

“We have been a part of accelerator programs in both cities and we have investors from both cities,” said Mallorie Brodie, co-founder of Bridgit. “And I really feel like we have been able to get exposure on how [the regions] can work together.”

Although Brodie won over the select group of investors who judged the event, she was in good company as Toronto’s Statflo, Sampler and Plooto; and Waterloo’s SparkGig, Suncayr and Medella Health; rounded out the competition.