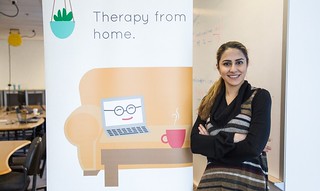 Spurred by her experiences with finding a therapist, Chakameh Shafii decided to develop a platform to connect Torontonians with therapists through videoconferencing outside of usual clinic hours. Now, TranQool is evolving the way therapists and patients manage their mental health.

When demanding work hours and a strenuous travel schedule started to take its toll on Chakameh Shafii, she found herself plagued by an unshakeable sense of anxiety. Her aunt recommended she see a therapist to talk it through and analyze what she was feeling.

“I hadn’t done therapy before so it wasn’t an option that came into my mind,” says the University of Toronto engineering grad. But what started as a casual suggestion turned into an arduous hunt for a cognitive behavioural therapist given that a lot of the doctors Chakameh was able to find only see patients during regular business hours, something that wouldn’t fit with her work schedule.

She asked around and found friends had similar challenges finding an affordable and available therapist. So the entrepreneurial engineer decided she would tackle the problem head-on. She teamed up with a like-minded colleague and the pair began surveying Torontonians about their thoughts on therapy.

“We spoke to people and asked them ‘do you know anyone who needed therapy, where’s the first place to go and what are the barriers?’ ” says Chakameh. “The top three things they said was affordability, accessibility and the stigma surrounding receiving therapy.”

The solution Chakameh and her co-founders’ – Babak Shahabi, Saeed Zeinali and Mohamad Ahmadi – came up with is TranQool, an online platform where users sign up, identify how they’re feeling and what issues they want to address, like anxiety or stress. They are then able seek out a therapist based on gender and expertise and book an appointment via the platform’s secure video chat at a time that fits with their schedule. And it only costs $60 for a 45 minute session.

“We have a therapist on there (who costs) $180 for an in-person session but all of them are working on a platform for $60,” says Chakameh. The logistics is that it allows therapists to pick up a few hours on the side to augment their regular hours, while making therapy more accessible for people with demanding work schedules or who live in rural areas an hour or two away from the nearest mental health specialist.

The platform also connects users with therapists based on language, a challenge they also came across during the research phase.

“Toronto is a diverse city and one of the problems we saw is that language is a barrier,” she says adding that so far they have seven languages including Japanese, Italian, Russian, Arabic and Chinese.

“From day minus one, when we were still doing the research part we would constantly go to events like TechTO and HackerNest and get feedback,” says Chakameh. “The good thing about these events is that they’re very diverse in terms of who shows up – designers, technical people, government representatives – we actually met Katherine, who runs the Imagination Catalyst at one of the networking events.”

Although TranQool can be used from anywhere without downloading any plug-ins, Chakameh and co. plan to keep their own roots in Toronto.

“There’s something about Toronto… it’s this diverse city but then you can just drive 45 minutes outside and there’s a rural area – so it’s a great place to test new things,” says Chakameh.

Techvibes is a publishing partner of StartUp HERE Toronto and this article was originally published on their site.