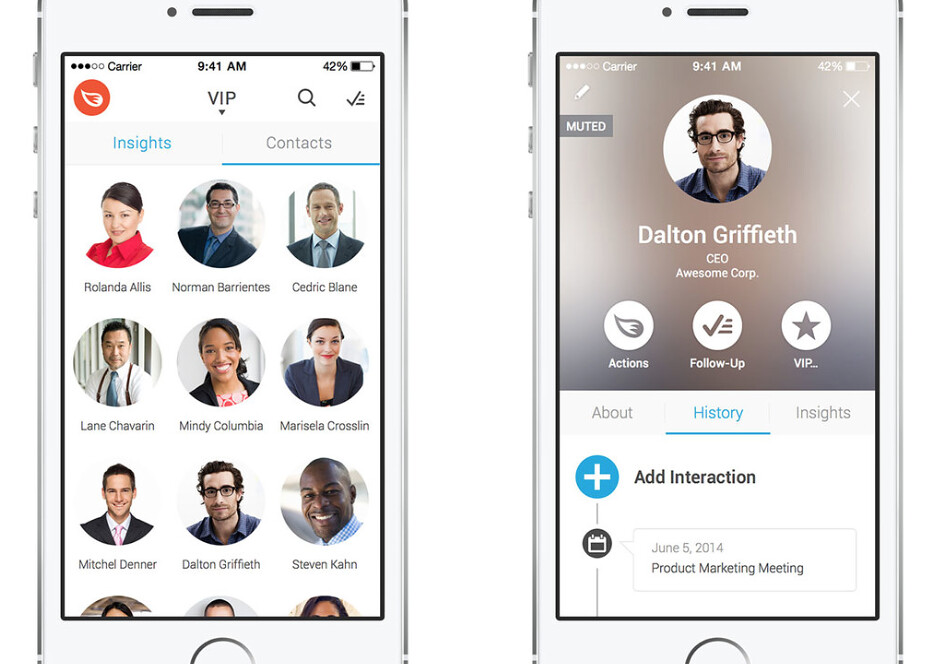 The “R” in the commonly-used acronym CRM doesn’t really stand for relationships, he says—instead, it just stands for records.

“Traditional CRM software doesn’t help two humans get closer together,” says Falcone, who has spent 15 years working in the CRM software industry. Instead, he says traditional products only gather a few details about the customer and what they bought.

Now, he wants to go deeper than that with his new startup, Triggerfox.

While he describes it as a “CRM for individuals,” he says the app is much “more than just a rolodex.”

“We’re in the business of helping business professionals build stronger relationships,” Falcone says. “Through a mobile app and acts of generosity.”

Triggerfox will “aggregate all your contacts,” Falcone says, gathering data from social networks as well as business transitions and “put it all together in one view.”

The app will also discover insights about a user’s contacts, which Falcone calls “triggers,” that can be used as an opportunity to connect with that contact. For instance, Falcone says, “if someone is celebrating something.”

“The last step is the actions,” Falcone says. “That’s the cool part about our app.”

One of those actions is the ability to send “a real handwritten card” through the app, he says.

While handwritten cards and CRM might “seem unrelated,” Falcone says it’s “all about building relationships.”

He says he was reading articles about the “lost art” of handwritten notes when he got the idea for the feature. And it makes sense, Falcone says, not only are the handwritten cards “authentic and genuine,” he points out that the “open rate of a handwritten card is 100 per cent.”

For users, its just a matter of typing a note in the app. Triggerfox staff write out the cards and put them in the mail.

It’s also how the company is making money from its free app – “the cards aren’t free,” Falcone says.

He’s also working on a pro version and looking at the possibility of adding in-app purchases.

“It’s an app for an individual,” he says, unlike most CRM software, which is aimed at enterprise

“This isn’t something that goes away when you move or change companies,” Falcone says.

And it looks like he’s not the only one who seems to think so. Triggerfox has already raised $1.8 million in seed funding and is currently raising another round.

The startup was also recently selected to join the Cossette Lab incubator in Toronto.

The chance to work with the major advertising and public relations agency is a big opportunity for Triggerfox, Falcone says.

“We’re an engineering-heavy startup,” he says, but “marketing and branding is not really our strength.”

By working with Cossette, Falcone says he hopes to tap into that companies “wonderful arsenal of talent” as Triggerfox hones its marketing message.