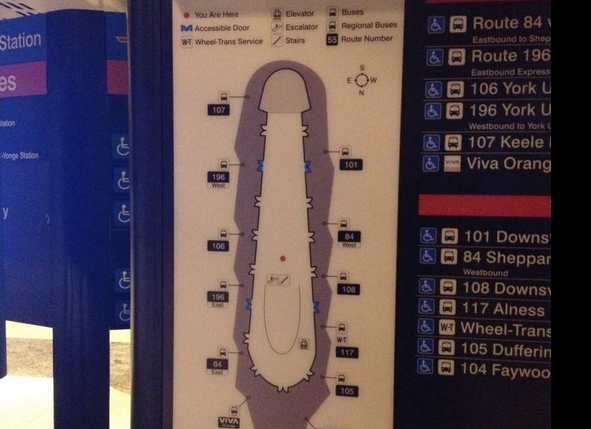 No one formally complained, but the smirks—and a buzzing Reddit thread—spoke volumes.

A TTC map at Downsview Station of was taken down earlier this week following overwhelming public agreement that, yes, it looked rather like a penis.

The new map was erected in December as part of a signage switchover at the station but got a rise out of Redditors when posted online.

The TTC says the switchover of signgage was a bit of a rush job and thus a few steps of the process were skipped, which allowed the sign to be approved. According to the organization, a new map has already been designed and will replace the current one “ASAP.” Meanwhile, the TTC says it has identified the employee who designed the map—and, while it does not believe said employee made the map phallic on purpise, will nonetheless take a long, hard look at how designs get approved in the future.