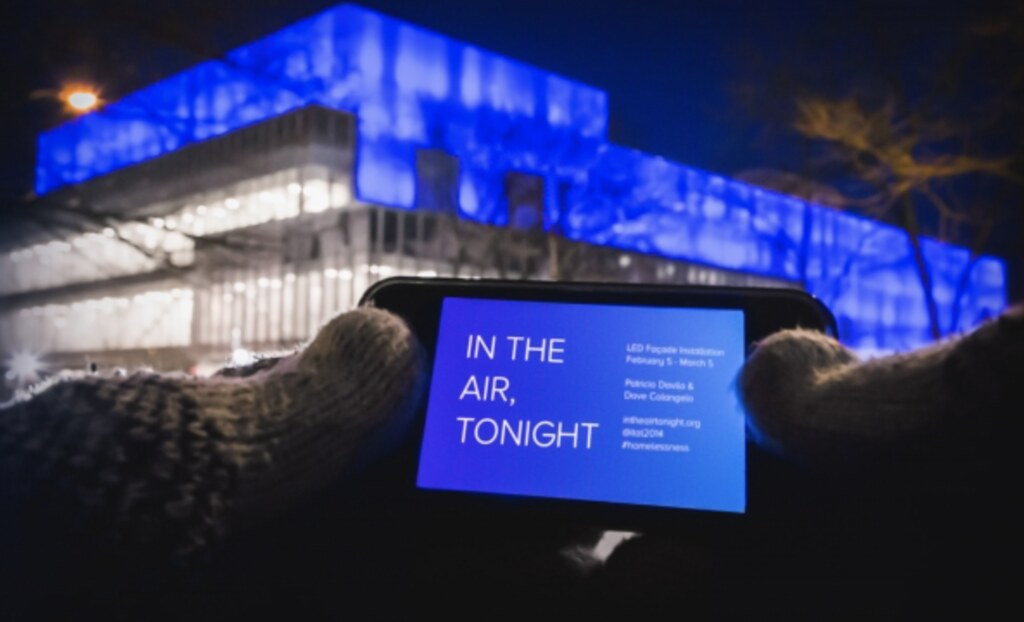 Twitter celebrates its 10th birthday today, and the social media platform that we’ve all grown to love—well, some of us—has come a long way since its launch in 2006. Twitter has become a daily ritual for millions of users, spanning everywhere from tweeting selfies and food pictures, to playing a pivotal role in revolutions like the Arab Spring.

To commemorate the special day, Twitter has handpicked 10 Canadians who have done great things on Twitter. From Toronto is Dave Colangelo and Patricio Davila, who co-founded the In The Air, Tonight project in 2014 to shed some light on homelessness—literally. From February 5 to March 5 every year, anyone who uses the hashtag #homelessness will cause the Ryerson Image Arts Centre’s LED light display to light up red.

Colangelo and Davila, who are both artists and researchers, hoped to use social media and a creative installation to start a critical conversation about an ongoing public issue that is often ignored.

“Really it was triggered by seeing that this building was at the centre of the highest concentration of shelters and drop in centres in the country,” says Colangelo, “so this is a very real, highly visible, highly critical issue of this specific area. So we thought this is a great way to bring these two things together.”

The campaign has continued to grow each year since its inception, attracting more and more users to use the hashtag and contribute to, not just a Toronto-based, but a global conversation about poverty and the lack of affordable housing. A webcam is set up so that people in different cities and countries can watch the building turn red as they use the hashtag.

“I think twitter is like a kind of public sphere,” says Colangelo. “What I mean by public sphere is the idea of where we gather to see ourselves and one another and debate matters of concern to us.”

Colangelo and Davila felt that Twitter was the best platform to start this conversation—it makes sense, as Twitter has often been used as a way to bring social justice issues to the forefront. Hashtags like #BlackLivesMatter, which sheds light on racist police brutality, and #BringOurGirlsBack, which was in response to a mass kidnapping of schoolgirls of Nigeria, demonstrate how users have utilized Twitter to start discourse on pressing matters.

The In The Air, Tonight Twitter account shares info about the mental and physical toll of homelessness, and includes tweets pushing for stronger legislation to help solve homelessness in Toronto. According to the City of Toronto website, there were an estimated 5,200 people who were homeless in Toronto in 2013.

The installation also brings awareness about the frightening physical conditions that homeless people in Toronto face in February, the month when the project takes place. A weather station on the roof of the building tracks wind speed and direction, which is visualized in waves of blue on the LED light display—this is displayed in between uses of the homelessness hashtag.

“The lived experience of homelessness is particularly trying at those times, so we thought it was important to amplify that in some way, both the experience of being exposed to the elements, and the consequences of that,” says Colangelo.

The project is now under the Public Visualization Studio, of which Colangelo is a founding member.

In The Air, Tonight is just one of many creative and socially conscious ways that Twitter has been utilized over the years. From a platform that initially confused many—I think we all, at one point, wondered what the point of Twitter was—to a social media hub that has been harnessed by activists, journalists, and political leaders, Twitter is now a considered an essential virtual space to millions.