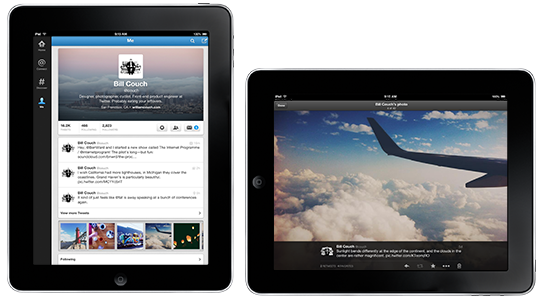 Today Twitter updated its app on iOS and Android smartphones and also for the iPad.

The iPhone and Android apps now show profiles with header photos “so you can express who you are more meaningfully.” And now there are photo streams for profiles that display the images people have shared on Twitter, which can be swiped through like a slideshow.

The iPad version of Twitter now boasts fullscreen viewing off photos and videos. You can also see who has followed or mentioned you, as well as who as retweeted and favourited your tweets. Discover has also been revamped. Finally, the profile photos and photo streams you’ll see on smartphones will appear in the iPad as well.

Twitter elaborates on profiles, which seem to be the biggest update to the social network today:

Make your presence on Twitter more meaningful with new Twitter profiles. Upload an all-new header photo on mobile apps for iPad, iPhone and Android or Twitter.com, and the same image will appear whenever anyone views your profile on the web or these apps. You can upload your header photo, which appears above your Tweets, to express yourself instantly, anywhere.