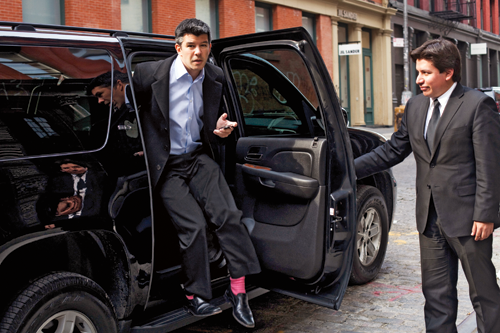 According to Uber CEO and cofounder Travis Kalanick, Vancouer is the only city that Uber has had to back out of.

So when Techvibes was invited by Launch Academy and SheTalks to cover a fireside chat with Kalanick in advance of his TED Conference talk, we had to attend.

While the intimate conversation covered topics including the entrepreur’s journey, Uber’s use of data, gender imbalance in tech, and self-driving cars, everyone in the room was eager to get his thoughts on cracking the Vancouver market once and for all.

“I usually ask, who came here in an Uber?” Kalanick opened. “That question doesn’t work out so well here in Vancouver.”

Uber has successfully launched in Canada in Montreal, Toronto, and Edmonton but through all its aggressive international expansion, just one attempt has been a true failure for Uber: Vancouver.

Uber expanded into Vancouver in 2012 but was quickly stopped by the Passenger Transportation Board of British Columbia (PTB).

The Vancouver Limousine industry is governed by the PTB and in Vancouver the PTB have set a minimum rate for any trip of $75—regardless of distance or time travelled. Consequently, Uber backed out as the minimum made it impossible for drivers to get riders and earn a sustainable living.

Despite this “old rule,” Kalanick believes that the City of Vancouver will “eventually make the leap” and his reasons should not fall on deaf ears considering our goal to be the Greenest City.

“It’s straightforward,” he said. “It does start with a high quality service for the lowest possible price. What that means is I can push a button and reliably get where I need to go when I want to. And if you can do it at a really cost effective price it means people don’t have to own cars.”

“And when people don’t have to owns cars then the first thing that happens is the parking situation in the city gets much better. In cities across North America, 30% of the land is used to store these cars that we sit in for only 4% of the day. And so you have whole structures, instead of parks, hospitals, and day care centres. And where all the great things that we could have in our cities there are hunks of cement storing hunks of steel,” Kalanick said.

He went on to sum up the Vancouver argument in a way that few will be able to debate.