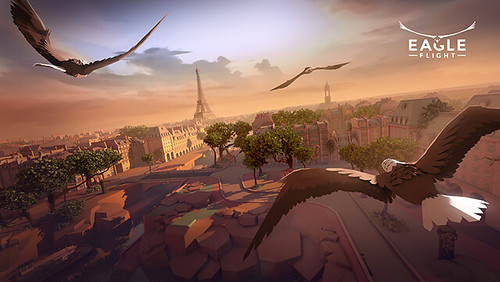 Ubisoft—developers of Assassin’s Creed and Far Cry—have announced that they are finally taking the leap into Virtual Reality with Eagle Flight.

The game, which will be available on major VR platforms including PlayStation VR, Oculus Rift and HTC Vive for PC, is scheduled for release in 2016.

Ever present in today’s entertainment industry, VR is a new form of experience that lends itself to video games and cinema. However, many of the major developers have reserved their seat on the spaceship destined for the future, and instead, keep plodding along as if there’s seemingly no new strides in the technology that connects us to their worlds.

Eagle Flight is a big step for a big studio. The title is being developed by FunHouse (a division of Ubisoft Montreal) and will consist of the beautiful Paris cityscapes that have been overrun by nature, and wildlife after a half-century of human-less existence.

Ubisoft says the game will include both singleplayer and multiplayer adventure. Up to six participants. Mention of “modes” in the release sparks an intrigue, as there’s not further mention of actual gameplay. In addition, Ubisoft does state to have expanded the technology to ensure that no motion sickness is afflicting the players. The new technology greatly reduces chances of motion sickness while enabling players to quickly master their skills in order to perform impressive stunts and experience the true sensation of flight.

“We’re excited to make the dream of flying come true with Eagle Flight,” said Olivier Palmieri, Game Director, Ubisoft Montreal. “Virtual reality has created new and amazing opportunities for game developers and we wanted to offer a full VR game that took full advantage of the technological advances. With the breakthrough we’ve been working on, we’re confident Ubisoft’s first game developed solely for VR will be a truly enjoyable experience for everyone who plays it.”

I’m pleased, and shocked, that Ubisoft would be the first to see value in such an endeavour. A move that has quite possibly shifted the opinion of this writer. Although, I’m sure a majority of the “AAA” studios have toyed with—or even executed on—the idea of making VR experiences, none of them (until now) have advertised these projects for/to the consumer.

I can only imagine that a lot of teams, such as many consumers, feel the in-home tech just isn’t there yet. The price-points are still rather high, and the skills needed to create a world that is fully enjoyable is no easy task. But it’s still an avenue that seems to only be influencing the decisions of smaller, indie studios.

Vancouver’s local Radial Games has taken to creating fully-flushed out VR games, even after the success of their indie couch-based pvp game Rockets Rockets Rockets. And if you were to sit down and listen to Radial’s Kimberely Voll, your vision of the future (and it’s inclusion of VR) would be changed. For the better.

Obviously banking on the nostalgia of their Assassin’s Creed world, Eagle Flight looks to land somewhere in between Entwined (by PixelOpus) and the Paris country-side we fell in love with alongside our assassin, Arno Dorian. Minus our species as a whole.

I reserve major judgement on the announcement, as it is not yet known how this “game” will be marketed. From the initial trailer, I’d say Ubisoft is aiming at more of an experience than a game, which tends to be the outcome when overcompensating for the shift to VR. Luckily, this game is months away, and we may yet learn more about the direction Ubi is going with this one. It’s exciting.

As consumers, we can only hope that VR becomes more accessible, and that more major developers begin putting firm ideas on the platform.

Both Ubisoft Montreal and Ubisoft Toronto are hiring.