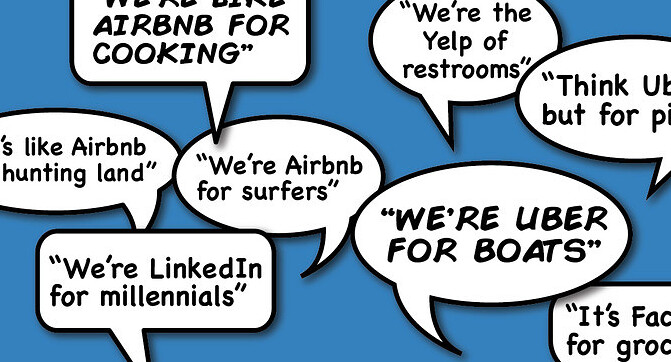 What’s your startup? Like another startup, perhaps—only different? Yeah, mine too. And his, also! Oh, and hers, too!

Analyzing nearly 500,000 company entries on AngelList, including more than 200,000 active profiles, MarketWatch drew a conclusion we probably all already assumed anecdotally: there isn’t a whole lot of originality going around among today’s startup descriptions.

Basically, MarketWatch says, if a startup doesn’t claim to the “the Airbnb for X,” then it’s probably “an Uber for Y.” LinkedIn, interestingly, also draws frequent comparisons.

In these comparisons, Airbnb is largely used to convey the idea of the sharing economy, while Uber is used as an example of an on-demand service and LinkedIn to connote a professional network. . . . The companies used more in the comparisons are also clearly beacons of success. Though they are both on-demand ride services, Uber, which has a $41.2 billion valuation, is used 220 times, whereas Lyft, which has a $2.5 billion valuation, came up seven times in the analysis.

Aligning a startup within these new markets can pay off. On-demand mobile startups that fulfill demand offline — as in the “Uber for x” model — had raised $1.37 billion in the first three quarters of 2014 and had average Series A deal sizes that were 37% higher than the average mobile deal, according to venture-capital database CB Insights. 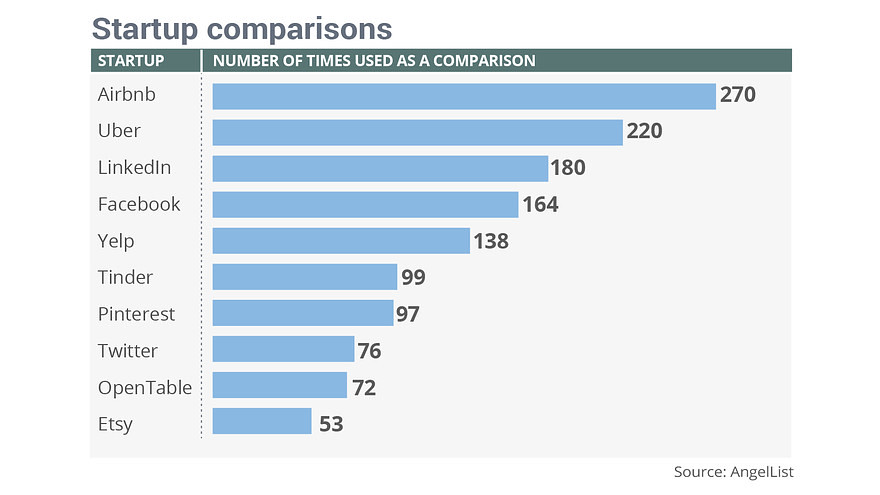 Simon Rothman, partner at Greylock Partners and an investor in Airbnb and LinkedIn, told MarketWatch that he believes drawing these unoriginal comparisons are “much more needed today to spread the message of who you are and what you do.”

However, Jeremy Levine, partner at Bessemer Venture Partners in New York, argued that the increasing prevalency of the practice is “no longer quite so inspiring.”