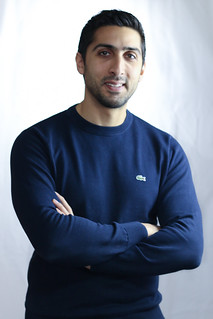 Ouissam Youssef is a busy man.

He’s the CEO of Valsef, a holding company with three operating subsidiaries. He’s also the CEO of Valsoft, Valsef’s software division. At Valnet, the crown jewel, he’s mostly an advisor, a reflection of his business philosophy of trust and delegation.

You’d think that with an industry leading company to run, Ouissam wouldn’t have time to sit down and chat, yet alone play golf, but he invited me to his office, where an impressive bag of golf clubs leaned on its stand.

Q: [Pointing to them] Are those yours?

Ouissam Youssef: No, they belong to a friend of mine, but I’m an avid golfer as well.

Q: Where do you find the time? This place is bustling.

OY: It can be hard, but you’ve gotta make a little time for the things you love.

Q: Is that how you got into business? Making time for it despite other obligations?

OY: Absolutely. I’ve been in business for as long as I can remember. When I was thirteen, I would go door to door and get people to sign contracts to get their snow removed or their grass cut. After a while, I had a team of people doing it with me. One year, there was a huge ice storm and we all profited handsomely.

Q: So when did you zero in on the tech industry?

OY: In the early 2000s, I realized that the Internet was causing a big disruption. And whenever there’s a big disruption, there’s a proportional opportunity for wealth creation. That’s when I started doing affiliate marketing, which led to my first company.

Q: So you weren’t a tech guy to begin with?

OY: No, not really. I was always about business. When I went to Concordia [in computer engineering], it was because tech wasn’t my forte. I had already been in business at the point for six or seven years, so I knew my way around, but I needed to learn a lot more about the digital sector.

Q: What is it you like so much about business?

OY: I like the sense of personal responsibility. When I work hard, I benefit, and when I make a mistake, I suffer the consequences. I also like the independence. When I sold my former company, in 2010, it was because I had identified another, stronger business model.

OY: The efficient allocation of capital across the tech spectrum.

Q: Weren’t you afraid of stumbling, of losing time and money?

OY: Of course. I mean, it crossed my mind. But my philosophy has always been start early, as soon as you possibly can. Don’t be afraid to make mistakes, but make them fast. Business is hard and you’re gonna get punched in the face a lot, but if you get back up and keep grinding, things will work out for you.

Q: What would you say your biggest “punch to the face” was?

OY: In 2013, things were just picking up with Valnet and we were doing quite well. But then Google, who was our only advertising partner, decided that there was a certain type of ad that we couldn’t run anymore. That really hit us hard. We had to let go of people. But whereas some people would have thrown in the towel – and you can’t blame them, it’s really easy to give in when you’re losing money like that – we kept looking for advertising partners. It worked out in the end, because the new partners we found ended up monetizing our pages tremendously.

Q: What about the inverse, your biggest success story?

Well our first company, the one we sold in 2010, was a big success. But today I would say it’s Valnet and TheRichest. We bought the company relatively inexpensively five years ago, and now it’s huge. We have more than a million page views a day and a million likes on Facebook. All we did was optimize the monetization of pages, which allowed us to purchase traffic at scale, which allowed us to invest in video content. The property has grown by a hundredfold under our care. We applied a similar process to ScreenRant, our more recent acquisition, and we’re seeing the same improvements.

Q: According to you, what’s the recipe for a successful business?

OY: Customer satisfaction first of all. The customers must have a good experience with your product, or else they aren’t gonna want to own it. After that, I’d say profits. They are, after all, the reason to be in this game, and finally growth, which can only happen if the first two boxes are checked off. If your customers aren’t satisfied, you compromise your reputation, you jeopardize your profits, and growth becomes almost like a liability.

Q: What ethos do you instill inside your offices?

OY: We want a very entrepreneurial culture, where people at all levels of the company are allowed to make decisions. This is the only way of building a company that can scale. If there are only two people at the top who can make decisions, they get overwhelmed by all the micromanaging and burn out. If everyone can make decisions in a focused way, it allows workers to be fulfilled and more productive. In my opinion, you must empower your employees. After all, aside from the customers, they are your biggest assets.

Q: I see. So what makes a good manager?

A good manager is capable of striking a balance. He’s not afraid to hold people accountable, but he’s also not a dictator. People should always want to work for you, but also understand the big picture and all that it involves.

Q: [Laughs] Yeah I understand that. Well I should probably let you get back to conquering the tech industry. Thank you so much for chatting with me today.

OY: The pleasure was all mine.