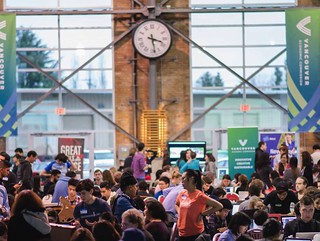 Tens of thousands of talented Canadians have been checking out the Vancouver Economic Commission’s (VEC) latest contest and video to show the tech boom happening in Vancouver, and the job opportunities that have sprung from it. Contest entrants are eager to explore some of those opportunities by winning a free trip to the city, and recent statistics show their enthusiasm is well-founded.

The tech sector is now the second fastest growing sector in British Columbia, with some 9,000 companies reporting over $23 billion in revenue last year. Vancouver is at the epicentre of this boom. According to Statistics Canada, three quarters of the 100,000 ICT professionals in the province now work in Vancouver. Three of Canada’s four “unicorns” are also Vancouver companies, with one of them, Slack, being called the world’s fastest startup ever to reach a $2 billion valuation.

This growth has put enormous pressure on the city’s tech companies to find top talent. Thousands of jobs remain open throughout the Tech and Digital Entertainment & Interactive industries, and ICTC Canada estimates that over the next five years there are expected to be 15,500 more new ICT positions available in the city.

The VEC has stepped in to help. In January, they sponsored a career fair at Canada’s largest learn-to-code event, the HTML500, and took the hiring effort to three other cities across the country – Calgary, London and Toronto. During the event, the VEC launched a contest with Vancouver’s Riipen to bring in digital resumes for Vancouver tech companies. Three thousand job seekers took advantage of the recruiting efforts, and the other cities took note – in a big way.

The VEC awarded the winner, Calgary resident Steven Shi, a free, customized trip to Vancouver during Vancouver Startup Week this coming fall. During the trip, Shi, an electrical engineer and power grid operator, will learn about the tech industry and join the premier celebration of our technology community. Shi was excited to learn about the opportunities in Vancouver, where technology is helping to transform the slow-changing energy industry, and spawn a local boom in Clean Tech.

“In my experience, the preference in the energy industry is on reliability over leading-edge technologies,” Shi said. “Not that this is wrong, but I believe that we can do better as engineers to bring newer technologies into the industry sooner.”

“I’m interested in a more dynamic work environment,” he added.

An internship at Apple deeply impressed and influenced Shi’s work style. He now designs software on the side of his day job, and thinks about the front end of products, as much as the back.

“It’s hard to perfect a product or service in the power industry,” Shi said. “The engineers always seem to have this mindset that if it serves a purpose and it’s not broken, don’t fix it. That is not my personal preference. I want to design a new product or process, to make it better.”

In addition to Clean Tech, the tech growth in Vancouver has fueled growth in other sectors that the VEC supports too, such as Digital Entertainment & Interactive. The VEC is helping to fill job gaps there, as well. Nearly 1,000 DE&I companies now operate in Vancouver, and earlier this month they held a career fair for visual effects, gaming and animation companies looking for top talent.

You can learn more about the VEC’s current talent attraction contest (deadline tomorrow, April 29) on their facebook page. The winner’s trip to Vancouver will include airfare and accommodations, a VIP ticket to Techvibes Techfest, a private tour of the Microsoft Development Centre and more.

This content is sponsored by the Vancouver Economic Commission.