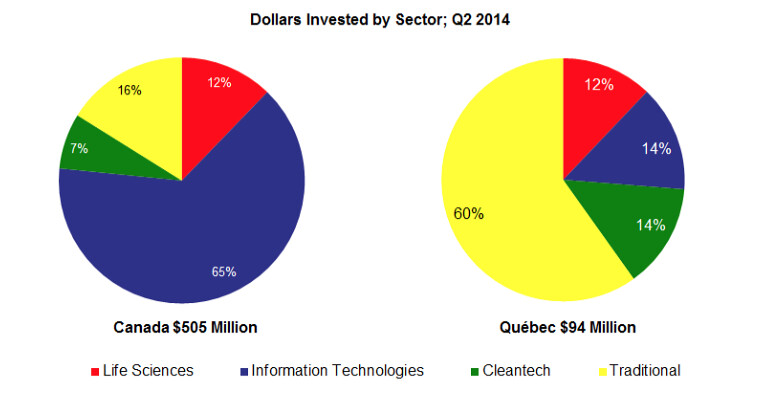 Last year, venture capital investments in Quebec reached their highest level since before the recession.

But 2014 isn’t shaping up to be another “booming” year, as Jack Chadirdjian, the president and CEO of province-wide private equity association Réseau Capital, described the market at this time last year.

So far this year, VCs have only invested $161 million in the province, according to a report prepared by Thompson Reuters for Réseau Capital and released on Tuesday. That’s a 58 per cent drop from the $384 million invested during the first two quarters of 2013.

The number of deals, however, saw less decline sitting at 74, down from 98 at the same time last year.

“Since the start of the year, we have seen the VC market in Quebec shaped by smaller financing rounds, with the average amount invested standing at $2.1 million, compared with $4.4 million during the same period last year,” Chadirdjian said in a press release.

The second quarter also saw big changes in who got funding in the province, with 60 per cent – or $56 million, going to non-tech companies. That’s compared to 30 per cent, or $19 million during the first quarter.

Only 13 information technology companies in the province received VC investment, totalling $13 million, during the three-month period that ended June 30. That’s compared to $15 million, which went to 10 IT companies.

Clean-tech companies posted strong growth though, receiving $13 million in VC investments during the second quarter, compared to nothing in previous three-month period.

For the second quarter, the Quebec numbers are almost the opposite of Canada-wide numbers. Across the country, 65 per cent of VC dollars, $325 million, went to IT companies while only 16 per cent went to traditional industries.

It’s the same story when it comes to overall dollars. Across the country, VC investments were up eight per cent during the first half of 2014 to $890 million. That’s pushed Quebec’s share of nationwide VC investments down to 18 per cent from 30 for all of last year.

It’s not all bad news though.

The amount of VC going to early-stage companies changed little from last year, at $24 million.

While new fund formation was down across the country, fund managers in Quebec received more commitments than any other region. Across Canada $643 million was raised by fund managers with 45 per cent, or $292 million committed to Quebec-based VC funds.

Quebec’s buyout and related private equity market, which includes “control-stake acquisitions, growth investments and other PE deals,” saw significant growth, increasing to $2.9 billion during the first half of the year, up from $2.5 billion during all of 2013.

That increase was driven by a large life sciences acquisition.