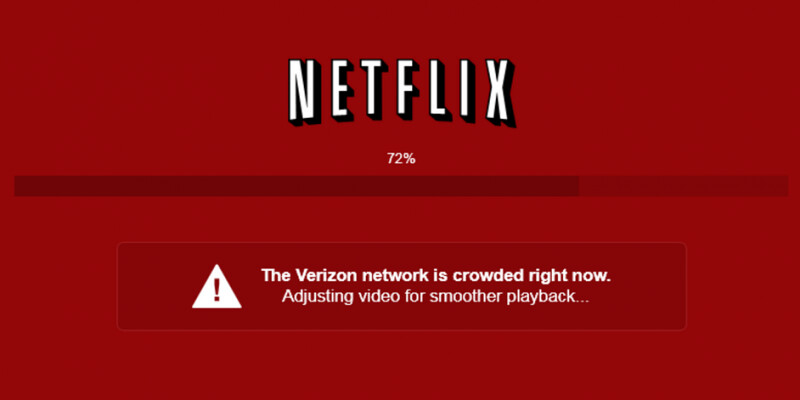 Netflix has given rise to a population of “binge watchers” who devour entire seasons of television shows in one sitting. For the end consumer, it’s a cheap, easy, and legal way to consume almost infinite content.

That convenience, though, often makes us forget just what is powering that library of constantly streaming video: a colossal volume of data, supplied by giantand profit-driven internet service providers. What happens behind the scenes matters. A lot.

Netflix and Verizon haven’t liked each other for a while now. And recently things started to heat up. Netflix started posting a new error message to Verizon customers that states “the Verizon network is crowded right now.” Not surprisingly, this blunt jab has gotten the internet provider rather riled.

RELATED: Netflix Accounts for One-Third of All Internet Traffic in Canada

Not only is Verizon claiming that the shoddy streaming is actually Netflix’s fault, but the company’s lawyer issued a cease and desist letter, demanding Netflix immediately remove the error message.

“The impression that Netflix is falsey giving our customers is that the Verizon network is generally ‘crowded’ and troublesome,” the letter reads, suggesting significant brand damage could be inflicted. “In light of this, Verizon demands that Netflix immediately cease and desist from providing any such further ‘notices’ to users of the Verizon network.”

The letter further demands that Netflix provides evidence that Verizon’s network is, in fact, responsible for poor streaming quality on Netflix. Based on past bouts between these two heavyweights, we don’t expect it will take long for Netflix to counterattack. And while Verizon may not provide internet in Canada, the outcome of this battle is certain to have trickle-down effects to the Canadian market—so pay attention, because when it involves the internet, there’s always a lot at stake.