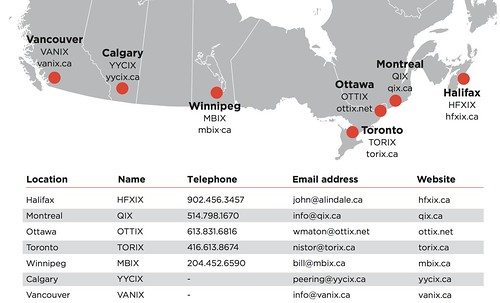 Researchers at the University of Toronto announced today that IXmaps, a visual, interactive database of Internet traffic routes, is now live.

.CA Community Investment Program, helps Canadians understand how their Internet traffic moves, and how certain traffic routes (known as “boomerang routes”) move data through the United States and into the jurisdiction of the U.S. National Security Agency before returning it to Canada.

“There is nothing inherently wrong with data moving unencumbered across an interconnected global Internet infrastructure. It is, however, critical that Canadians understand the implications of their data being stored on U.S servers and moving through U.S. jurisdiction,”
notes Andrew Clement of the University of Toronto. “ISPs need to be transparent, privacy protective and accountable custodians of user information in this regard. Internet users should be fully informed consumers and citizens when making choices about their sensitive personal data.”

The most popular sites Canadians visit online, such as Google, Facebook, Youtube or Amazon, are based in the United States. When using these services, Canadians likely recognize the fact that their data leaves exclusive Canadian jurisdiction and is exposed to American mass surveillance under such laws as the Patriot Act.

Canadians may be surprised to learn however that when accessing Canadian sites, even those in the same city, their data often still flows through the United States. Exposing private or sensitive data, such as health information, student records, political affiliation, religious beliefs, financial information, controversial viewpoints or intimate communications, to foreign surveillance is highly problematic.

“Few Canadians realize just how much of our everyday Internet traffic travels through the U.S.,” adds Laura Tribe, Digital Rights Specialist, OpenMedia. “You could be in a restaurant in downtown Montréal emailing your friend across the street, and that data could easily be traveling through the U.S., where it’s subject to invasive NSA surveillance. That’s why it’s so important that Canadians pitch in, and help us learn more about the paths our data actually takes online.”

IXmaps has a crowdsourced database of over 40,000 internet routes, which you can map selectively via the the IXmaps.ca website.