Yesterday, we wrote about how Apple and Samsung combined for a remarkable 99% of the world’s smartphone profits—with Apple leagues ahead of even Samsung, owning more than 70% of all profits. But we didn’t include this chart from Asymco. Shown below, the visualization of just what Apple is doing is absolutely jaw-dropping. 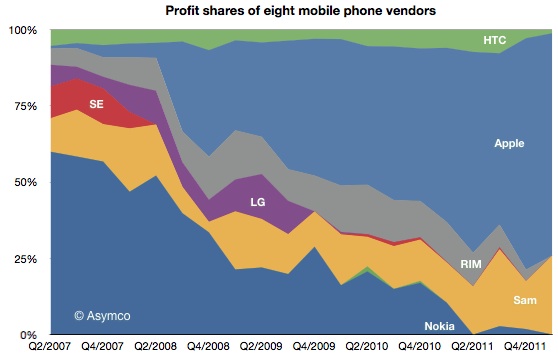 Look how it literally pushes everyone’s profits down, devouring massive chunks profit share from Nokia—which once boasted more than 50%, but has become completely irrelevant in just four short years. And look at who it crushes the hardest toward the end: RIM, in grey, suddenly vanishes into nothingness at the end.

Apple’s global market share of mobile phones is small. It’s less than 10%, according to most estimates. But is that even a relevant number anymore? Apple is single-handedly dominating the entire planet’s smartphone industry with its iPhone. And our RIM, unfortunately, has not been immune to the effects.