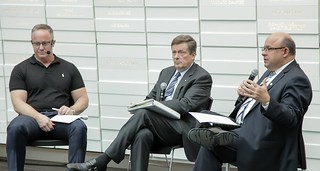 Today investors and entrepreneurs gathered for Series 401, an event held in conjunction with CIX, and hosted by the DMZ and Communitech in Waterloo.

The event gave the top startups from the Toronto —  Kitchener-Waterloo corridor a chance to pitch their ideas to investors.

The pitch session was preceded by a panel discussion with Toronto Mayor John Tory and Kitchener Mayor Berry Vrbanovic, moderated by CTV’s Kevin Newman. The discussion focused mostly on how the startup ecosystems between Toronto and KW complement each other, and what’s needed to further the development of tech in the regions.

Both Mayor Tory and Mayor Vrbanovic cited a need to build transit infrastructure within region, and noted that help from government and the private sector is needed.

“We’re in positive talks with the province, but looking to the private sector for help as well,” said Mayor Tory.

Mayor Tory and Mayor Vrbanovic also agreed that it is important to provide support and resources to innovators along the corridor. “We want to be the home of innovators and disruptors,” said Mayor Tory.

After the discussion, there was a rapid fire succession of pitches from the top 12 startups from Kitchener-Waterloo and Toronto seeking an investment of at least 500 thousand dollars. The startups presenting were selected by incubators and accelerators in the region, including the DMZ, Communitech, L-spark, One Eleven and others. After the pitches, companies demoed their products for attendees, concluding the event in a networking session.

Each year, Series 401 has been held just after CIX, giving investors from outside the innovation highway who attend CIX an opportunity to take a closer look at startups from the supercluster. The event is geared toward building the relationship between KW and Toronto. For their part, Communitech, the DMZ and One Eleven have agreed earlier this yearto allow member startups access to one another’s facilities and services.

Steve McCartney, VP of Communitech’s Startup Services Group, helped organize the event, and looks at the Series as a way for startups to gain exposure to venture capitalists and among each other in the region.

“There are companies we all have regard for in our individual areas, but we hope each time to float the best companies from KW and Toronto,” said McCartney.

McCartney also pointed out that Series 401 lets companies that are different sizes and at different stages get the same chance to impress investors.