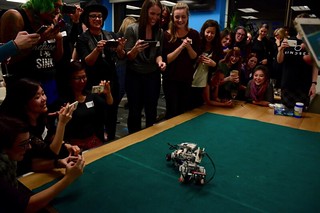 Sponsored by Plenty of Fish and GeeringUp (a UBC-based nonprofit), we had a Taco bar, robot kits and wine. The event brought out a group of women across a broad range of industries including startups, private equity, and marketing.

Hosts Sarah Applebaum and Andrea Palmer, a mechatronics student at UBC, enthusiastically shepherded us through the evening.

Kicking off with Suzanne Gildert, CTO of brand new startup Kindred.AI, shared her story of what inspired her to become a roboticist. Starting out as physicist, she was drawn to how robots were evolving from simply being task oriented to having brains, or Artificial Intelligence. Machine learning of behaviours through data mining to recognize patterns for decision-making, has Ms Gildert now building personal robots.

But back to the reality of our first robot building workshop. After a demonstration by volunteers from the UBC robotics club (The Thunderbots), our chic gang of geeky gals split off into small groups. We grabbed motors, sensors, wheels, computer brains (the basic kind!), various lego pieces, and began assembling our killer beasts.

Far from anything like Spike Jonze’s futurist-fantasy movie Her, we did manage to build our robots to battle it out. Of course we had team names such as Majestic Death Unicorn, The Femme Bots, Mars Raz3r, Buffy the Battle Bot, Lurch and Red for Blood, and with the help of some very patient mentors, we built, we conquered and we kicked a$$!

Last winter, co-organizer Sarah Applebaum attended a one week executive program at Singularity University, where a battle of the bots workshop taught her that not only is building robots more fun than she could have imagined, but rarely are there workshops like these for women. When I asked Sarah what inspired her to want to put on this event, she said “I wanted to find a way to provide women in my community with both exposure to really cool technology in a way that’s fun, accessible and relevant to them, and also try to leave them with that same feeling of empowerment that I had.”

Exposing girls to STEM (Science, Math, Engineering and Technology) education, whether through academia or play, continues to be an outlier subject. A Stats Canada study revealed that women are less likely to choose STEM programs for their post-secondary studies, regardless of mathematical ability. Another study by the Organization for Economic Cooperation and Development, found that 15 year old girls outperform boys in science around the world, except for Canada, the United States and Britain.

Both studies recommended introducing STEM based subjects at an early age, whether through school or family activities, emphasizing from an early that we live in a “science-based” world, from the electronics we have in our homes to methods of transportation, climate change and even what we eat. Something as simple as following a recipe for baking a cake, is founded on the basic principles of math and science. In other words, making science accessible, fun and part of everyday life can help minimize the gender gap and serve to inspire girls to pursue careers in STEM based disciplines.

Of course you probably want to know who the winner was. Buffy the Battle Bot fought victoriously to the end, beating out all her opponents. If this peaked your interest whether you are serious about starting to explore the world of robotics, or you just want to come out and play, check out their Facebook page to hear about the next event.