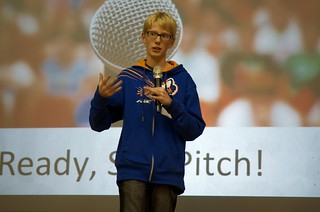 How does it feel to step into the adrenaline-filled experience of launching an idea into orbit from scratch in just 54 hours? We interviewed Tom, the 14-year-old team lead of MyoMobility, the winning Youth team at Startup Weekend EDU Calgary.

For Tom Stoesz, it all started when a friend of the family told his mom about Startup Weekend EDU.

“I have a lot of ideas rattling around in my head. I wanted to learn how to get those ideas from my head into the real world,” explains Stoesz, a Calgary student who led his team to win the youth category at Startup Weekend Calgary EDU on October 19.

He was not prepared for what happened next.

“I decided to go in and be a sponge – to soak everything up.”

On the first evening, Tom decided to pitch when other kids at his table decided to do so. His idea was to use myoelectric sensors to make better, more affordable prosthetic devices for amputees.

Tom’s idea came from observations he made about people around him. “I’ve seen people who are missing limbs and they either walk around with no prosthetic or something very simple. I wanted to have a prosthetic that was available and affordable that looked and worked like a real hand,” he says.

He recently got a heart monitor and wondered how it worked. After a few Google searches, he learned about myoelectric sensors. “There are prosthetics that use these sensors but they’re $20,000. I was trying to think of a way to make it inexpensive and functional.”

Of the 12 ideas that made it through the first round of pitches, his idea ranked 11th.

Tom formed a team that included three youths and two adults: Lulu, Justin, Sarah, Ahmed, and Sarah’s mom, Mona. Everyone on the team had unique talents. Ahmed did the programming and prototyping. Justin built the presentation. Lulu, Sarah and Mona did customer and concept validation research during the weekend.

The team hit a major setback when, despite making over 40 phone calls, the only person they managed to reach asked the team to call back on Monday.

The team asked themselves what other ways the same technology could be used. “Some people are biofeedback maniacs, so we decided that we could use the technology for an exercise monitoring system embedded in clothing. We would create the Swiss Army Knife of wearable biofeedback devices.”

Although they had a new idea, the team was discouraged. They had just eight hours to do what other teams had all weekend to do: validate their idea, build mockups, create a business model, and research the market.

The mood changed when they began interviewing potential customers who told them that they would buy their solution. “When we started getting absolute yeses from people, we knew we were on to something,” he says.

By the time presentations began on Sunday evening, the team had developed a mockup of an app and shirt, validated the idea, developed a cost and revenue model, learned who their competition was, figured out how to acquire customers, and determined which companies would make good potential strategic partners.

Tom admitted that he had to get over his fear of public speaking to make the pitch, which lasted for five minutes in front of three judges who were prominent figures in the entrepreneurial community. “I had been an MC for a group of about 400 at my elementary school, but that was very different than this.”

The adrenaline and stress levels were at a maximum for all teams, including MyoMobility. “There was a moment when I was preparing my pitch when I just had a mental overload and couldn’t focus on anything. Getting over that hurdle and into the mindset of you’re going to present this idea to however many people are there was a real challenge.”

The highlight of the weekend was finishing his pitch. “It was such a relief that it was over, and there were all these people congratulating me,” he says.

Watch the MyoMobility final pitch and the other 10 pitches here.

Being selected as the winner of the youth category was “amazing.” 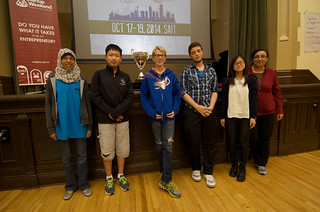 When asked what part of the whole experience surprised him, Tom said, “The amount of support we got from mentors.”

A key part of any Startup Weekend is the support of volunteer coaches and mentors—seasoned entrepreneurs from a variety of industry sectors who provide advice to teams about everything from how to validate their concept, to how to pitch it to judges and potential supporters.

As Tom states, “We asked for as much information as we could, especially about pitching, and got it.”

The biggest takeaway from the experience? Tom says, “I learned a lot about the Lean Canvas and how to start a business, which is great because I have a lot of ideas. I learned that if you work really hard, you can get great payoff.”

Curious about Tom’s experience? Learn more about what 65 participants accomplished at western Canada’s first ever Startup Weekend EDU event, and find further information about Up Global, the organization behind it!