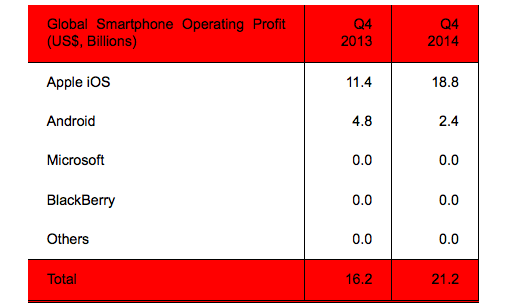 Two new reports this week reveal just how tiny and irrelevant BlackBerry has become in the mobile space.

According to IDC, Apple’s iOS and Google’s Android combined for more than 96% of all smartphone shipments in 2014, a number that actually managed to rise from 2013 despite increased competition.

Windows Phone grew 4%—a negligble rate compared to iOS and Android. But at least it grew. BlackBerry’s share plunged an incredible 70% from 2013, according to IDC.

“Many of the same drivers were in play for Android and iOS to tighten their grip on the market,” said Ramon Llamas, Research Manager with IDC’s Mobile Phone team. 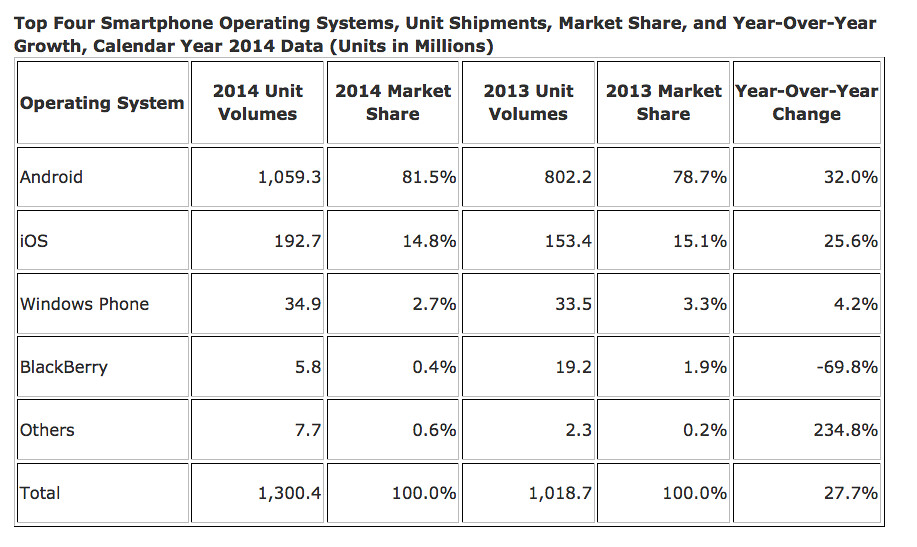 “Instead of a battle for the third ecosystem after Android and iOS, 2014 instead yielded skirmishes, with Windows Phone edging out BlackBerry, Firefox, Sailfish and the rest, but without any of these platforms making the kind of gains needed to challenge the top two,” said Melissa Chau, Senior Research Manager with IDC’s Worldwide Quarterly Mobile Phone Tracker.

It’s not just share. Profitability, too, is dominated by companies that aren’t BlackBerry.

In terms of profitablity, iOS generates a staggering 89% of all mobile profits, according to Strategy Analytics, leaving even Android in the dust. BlackBerry’s profit share was so small in 2014 that Strategy Analytics counted it as 0%. Its profit growth was also listed as 0%.

People have been impressed with Chen’s handling of BlackBerry since taking over—us included. And certainly the company is in better financial shape than during its rock bottom years. But its days of public consumer relevancy seem permanently over; imaging BlackBerry’s future role as anything more than a niche serving enterprise customers seems like fantasy.