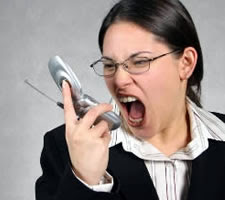 The CBC reported today that the Consumers Association of Canada is hearing more and more complaints from consumers about dropped calls on 3G cell phone networks.

The CBC reported that the group considers the issue a top concern, and experts believe that increasing traffic is to blame.

“We’re hearing a lot of complaints — many, many more than usual — that calls are being dropped. This is happening on a very regular basis,” he said.

Most new phones now use the 3G — or third generation — network, which is supposed to allow faster surfing and accommodate bandwidth-heavy applications such as video.

But that network is getting overloaded, said University of Calgary engineering professor Geoff Messier.

“I believe that the increase in dropped and blocked calls that we’re seeing is really just because of an increase in traffic,” he said.

Telus says that cell phone towers can become congested during peak times, and they say that new towers are in the works to help carry the load.

The problem of 3G congestion isn’t unique to Canada. South of the 49th, AT&T has been aware of the problem for some time, and they’re working on prioritizing fixes — by following their customers’ Twitter feeds.

As Jia Wang, of AT&T’s Internet and Systems Networking Research Center tells MIT’s Technology Review, the automated monitoring of customers’ Twitter feeds yields 90 per cent accuracy, and gives them some idea about where solutions are most needed.

“We are trying to identify three pieces of information: where the customer experienced problems, what type of problem, and when they experienced it,” she says.

The company can use the time stamps and location data associated with collected tweets to estimate where and when a person experienced a problem, making it possible to put the records on a map. This information can be compared with system logs and customer service calls. In practice, the technique picked up on issues that wouldn’t otherwise have been reported. It also detected issues earlier—around 20 minutes earlier, on average, than a customer service call came in.

That’s a pretty ingenious way of serving the customer. It makes you wonder what kind of improvements the Canadian providers could make if they were as proactive in finding and solving their customers’ problems.

Ball’s in your court, Canadian telecoms; get on it!