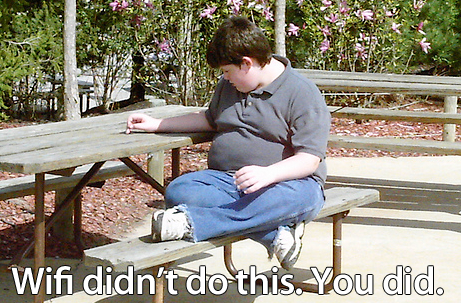 That cool thing we’ve all come to enjoy and love every day. It allows us to connect our smartphones, tablets, and computers to the glorious invention known as the internet, through which we communicate, create, and waste colossoal volumes of time. What would we do without it at this point, honestly? Twiddle our thumbs? Kick rocks around? I don’t even want to think about it.

But wait! Wifi is killing our children.

That’s horrible. Children should not be harmed by invisible things. Especially when they don’t even know it’s happening and have no ability to protect themselves. They’re innocent. And they’re vulnerable. Parents are responsible for their wellbeing. Like how today’s kids eat healthy foo—

But wait! Wifi is not actually killing our children.

Someone, somewhere along the road grabbed a megaphone and shouted to the world that wifi could possibly be potentially maybe sort of harmful to our children, perhaps. The consequence? A march of anti-wifi parents swept North America, yelling their unfounded statements into the ears of anyone who would listen.

For several years now, Health Canada has said it can’t find any dangers to using wifi. “There is no convincing scientific evidence that this equipment is dangerous to schoolchildren or to Canadians in general,” the organization says. Even when exposed 24 hours a day for a year straight, a children would suffer “no adverse health effects,” the government iterates after multiple extensive studies.

Yet still parents fight to eradicate wifi from schools. In almost every province this has been an ongoing battle. But where’s the science behind their rants?

Wifi uses radio frequency signals. You know, like FM radio and television broadcasting. Not to mention mobile telephony. Oh, by the way: radio frequency exposure from wifi is actually lower than from TV or radio. The counterargument? “My kid went to school and now has a headache—must be the wifi.” Yeah, right. Okay.

(Is that your son eating a whole pizza while his friends are running around in the yard?)

“There is absolutely no scientific evidence that supports wifi causing [health effects],” wrote Best Health Magazine in a report on the safety of wifi. “It does not have enough inherent energy to break molecular bonds [for example, to cause genetic damage that might lead to cancer]. Claims that EMF causes symptoms like headaches, dizziness and racing heart, sometimes called ‘electrosensitivity,’ have not been proven in the highest quality studies.”

Now imagine schools without wifi. Zero difference to health, obviously. No changes anywhere—well that was pointless. What’s next though? Cafés? Hopsitals? Yeah, even those have wifi. Most major venues, movie theatres, etc. Some cities have started providing wifi on the open streets. How will you protect your kid from all of these nonexistent threats? Maybe they should just live and sleep in their safe, wifi-free school.

Now imagine if these parents, who theoretically mean well despite their staggeringly misguided outlook, applied all of this energy to real health concerns. Like how their kids are fat.

“Obesity is now reaching epidemic proportions in both developed and developing countries and is affecting not only adults but also children and adolescents,” reads a report on the management and prevention of obesity in adults and children by David C.W. Lau, James D. Douketis, and several other researchers. “The problem of obesity among children and adolescents in Canada … is advancing at an even more rapid pace than obesity among adults.”

You think your child will die from cancer because she connects her iPod to a local wireless network? She won’t. Will she have a heart attack from obesity in her 30s or suffer from diabetes because you gloss over the dangers of stuffing her cute little mouth with cookies everyday? Much, much more probable.

“There is compelling evidence that overweight people are at increased risk of a variety of health problems, including type 2 diabetes, hypertension, dyslipidemia, coronary artery disease, stroke, osteoarthritis and certain forms of cancers,” the study goes on to report. See? Real problems with real impacts on individual humans and society as a whole. Reality. Not fiction. Something worth putting effort into changing.

If you care about your children, let this battle go, and fight one that will actually make a difference.

Go on: swap your tinfoil hat for a soccer ball. Go outside and play with your kids. You might just save their life—and perhaps yours as well.