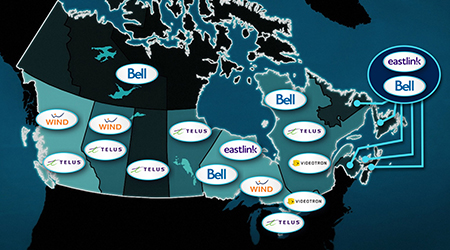 Industry Minister James Moore today announced that five companies have won spectrum across the country, with new competitors emerging as winning bidders on most of the spectrum.

The total revenue generated from the AWS-3 spectrum auction is $2.11 billion. The next opportunity for wireless companies to acquire more spectrum will take place on April 14, when bidding begins on the 2500 MHz spectrum auction.

By summer 2015, following the AWS-3 and 2500 MHz auctions, the amount of spectrum available to provide mobile services to consumers will have grown by almost 60 percent since early 2014, according to the Canadian government.

Here are the results:

“Spectrum is a vital public resource,” said Moore in his speech. “In 2006, 98 percent of spectrum was held by Canada’s largest wireless companies. By this summer, we expect new competitors to hold approximately 25 percent of total wireless spectrum.”

Wind Mobile, Canada’s fourth largest wireless services provider, says today’s announcement that it has won 30MHz of “critically important” wireless spectrum in the government’s recent auction will enable it to “greatly enhance its network and will significantly boost performance for its subscribers.”

“This is tremendous news for Wind and our fantastic customers, and it’s exciting news for all Canadian mobile users, who will now benefit from true competition in wireless services for years to come,” said Anthony Lacavera, Chairman of Wind. “This much-needed spectrum will enable Wind Mobile to launch LTE and helps level the playing field against the Big Three national carriers.”

“The federal government made a clear, strong commitment to fostering greater competition in the wireless industry, and should be commended for delivering on that promise,” added Simon Lockie, Chief Regulatory Officer of Wind Mobile, which now has over 800,000 customers.