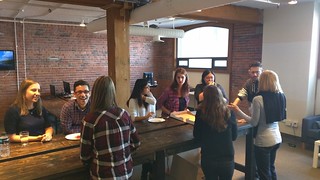 It’s no secret that Vancouver’s tech industry is booming in the city that grew Hootsuite and Unbounce and has just opened its doors to welcome Microsoft and Amazon.

In Vancouver and in tech sectors across the globe, women just aren’t jumping in for the ride, and for many reasons and through many personal experiences, I can understand why. But that doesn’t mean that women can’t or shouldn’t do tech.

When we first started Globalme, a Vancouver-based localization and language technologies company, our roles were closely in-line with the industry expectations. The males handled the technical aspects of the business and us females recruited talent and lead projects. And in many ways, these roles still ring true.

But somewhere during our growth, our roles became intertwined with the high-tech environment that Globalme has become. Today, we have an eighty percent female workforce and no matter which role we occupy, from our Localization Engineers to our Project Managers – we all do tech.

For many women, the thought of working in a high-tech environment is daunting. It’s often perceived synonymously with fancy coding languages, debates about open-source vs. proprietary software and never ending cups of coffee in front of a computer screen. Although there are many areas in high tech where both men and women can thrive, most women (for a varying list of reasons) choose not to. But in our industry, as in many others, high tech is much more encompassing than the coding language it is written in.

I consider myself very lucky to be working on some of the world’s newest emerging technologies. I get to work with teams across the world to collect speech data for machine learning, or test new games which can recognize facial mimics with the latest human tracking cameras. I am able to put these technologies to the test and observe how they perform in real-world environments. I may not write code and I certainly don’t design hardware, but I do know the tech industry quite well.

Despite Globalme being a predominantly female workforce, I understand how uncomfortable it can be for females to work in male-dominated industries. Women and men have different communication styles, we reason things differently. Not seeing enough female role models in the tech industry is surely discouraging for many women who consider it as a career path.

Many of the business networking events that I attend are filled with males but have very few female faces. To this day, I can’t say that I feel fully comfortable at those events.It’s intimidating, but if we don’t show up, we’re never going to change the ratios that are making us feel like we don’t belong.

The fact that Globalme recently ranked No. 94 on the 27th annual PROFIT 500, a ranking that recognizes Canada’s Fastest-Growing Companies, and placed No.11 in BC’s Top 100 Fastest Growing Companies is proof that we do belong and that women can (and should) work in tech.

Emre Akkas, our CEO and one of the few males in the office, recently shared his own perspective on this topic, “Men waste thousands of gallons of fuel every year, driving around while not asking for directions. We’ve got no fuel to waste!”

All jokes aside, we could never have accomplished any of the above without our incredibly talented male team. We never had a goal of being a female dominant workforce, nor is it going to be our goal going forward. Diversity is one of Vancouver’s biggest strengths and we utilize that to our advantage. Magic happens when you mix men and women of different cultural backgrounds and nationalities.

I do hope that Globalme can be an example in this male-lead industry and I invite all Vancouver businesses to benefit from the diverse workforce that our local market provides. Together we can show the rest of the world that women can do tech.