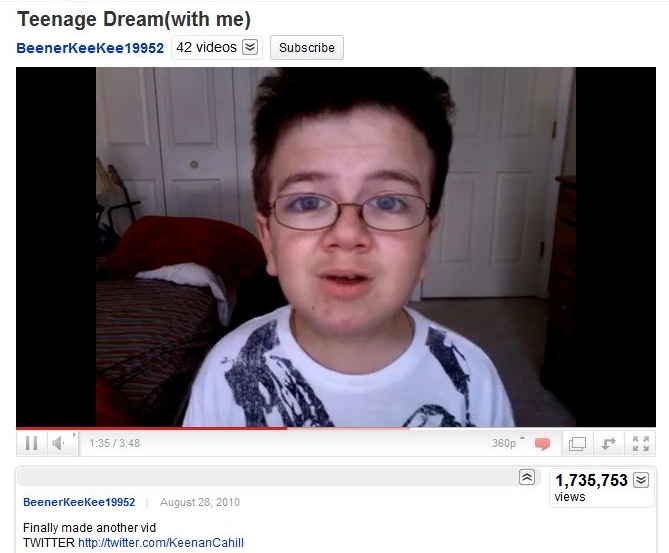 Over the years, YouTube has given rise to myriad celebrities. Some never break out of YouTube. Some experience temporary or shallow fame. And some go on to become superstars.

Among the latter is Canadian-born Justin Bieber. The teen singing sensation is hugely popular these days, with multiple albums out, sold-out tours, and even a best-selling “memoir” (yes, you can now write biographies before your balls drop).

He was discovered on YouTube by Usher and the rest is history. Justin is a Canadian YouTube success story who will be raking in millions for many years to come.

But the U.S. looks like it may have its American counterpart.

If you are unaware of him, Keenan enjoys lip syncing to hip-hop tracks such as Far East Movement’s “Like a G6,” as well as pop ballads like Katy Perry’s  “Teenage Dream” – even if he never, ever knows any lyrics. Ever. At all.

But that’s okay, because his swanky dance moves, perhaps demonstrated best in his cover of the late Michael Jackson’s “Thriller” – which features props – easily make up for it.

It wasn’t until Keenan went on Chelsea Lately and performed “Down on Me” with 50 Cent that, suddenly, shit was real.

With the 50 Cent video breaking 7 million views in just 10 days, and his most-viewed video pushing for 18 million, Keenan is dipping his toes in celebrity waters. But can this Chicago-born YouTube maven trump his Northern neighbour, Biebs?

Both Justin Bieber and Keenan Cahill were aged fiften when they were discovered. Both were discovered on YouTube. Both gained popularity through black hip-hop stars. Both were featured on Chelsea Lately’s crappy late night show. And neither can sing.

But Justin Bieber has done some neat-o things, like tweet out a bratty fan’s phone number (who then received 26,000 text messages) and popularize a lesbian hairstyle among preteen boys (plus one older dude, Chad Rogers. Wrong age, bro, wrong age).

While I’m sure BeenerKeeKee19952 is very nice and I wish him the best, I have to say that Canada pumps out the better YouTube stars. Justin’s best video has several times more views than Keenan’s entire library with a staggering 387,927,766 for “Baby.”

I know Michael Arrington is firm in his belief that Canada sucks (kind of like how he said AOL sucked before it bought his company), but I really don’t think this one is even a contest.

After all – to make use of Canadian cliches – while Justin may use more “Moose” for his perfectly coiffed ‘do than Keenan for his unruly mullet-‘fro, I’d wager Justin’s stardom will equate to him getting a lot more “beaver.”