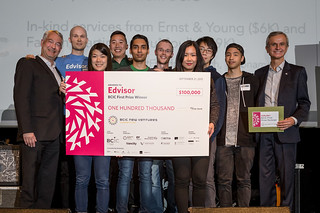 This evening the BC Innovation Council (BCIC) and New Ventures BC announced the 2015 winners of the biggest technology startup competition for B.C.’s emerging innovators.

The $100K First Prize was awarded to Vancouver’s Edvisor.io.

A graduate of TechStars NYC, Edvisor.io is the first end-to-end platform that directly connects schools that recruit internationally with the education agencies that sell their programs.

Schools currently recruit international students by marketing their programs in an ad-hoc, low-tech way, through education agencies located in the student’s home country.