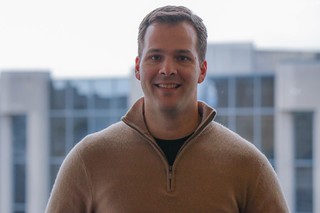 In 2004, Stephane Manos graduated from Concordia University with a bachelor’s degree in computer engineering. Now, only twelve years later, he’s the Vice President and Co Founder, of Valsoft, a high-powered tech company that’s turning Ville Saint-Laurent into the Silicon Valley of the Eastern Seabord.

I went to his offices, chock full of young, vigorous employees despite what many have called Montreal’s moribund economy, to sit down and have a chat with this visionary.

Q: Why don’t you start by telling me how you first got started in business?

Stephane Manos: I come from an entrepreneurial family. My dad owned a business, a body shop where I spent most of my Saturdays when I was a kid. My uncle owned and operated his own retail store.  As a teenager, I wanted to be just like my dad, so I got a job in business too. I tele-marketed, selling low-interest credit card packages to people over the phone.

Q: That must’ve built some character.

SM: Absolutely. I had a rough first week on the job. I didn’t make a single sale. Everyone kept hanging up on me. But I ended up working there for two years, including summers. I was determined to make it work

Q: Which is when you started your own business?

SM: Well, first I went to university. [Laughs]. But yes I realized at a certain point that I enjoyed working hard. That and I liked overseeing things from the ground up, not just jumping in on someone else’s “thing”. I wanted to participate in the creation of an enterprise, so I went out and did it.

Q: I think a deterrent for many aspiring, especially young, entrepreneurs is a fear of failure. What advice would you give them on how to be successful?

SM: We do not shy away from failure. Success is built on the pillars of your mistakes. Always try to minimize them, but making them is the only way to learn. I also suggest starting early. I think the earlier you start any form of entrepreneurial activity, the earlier you make the mistakes and the earlier you learn. This could be small things like budgeting when young, or selling newspapers or having a lemonade stand.

Q: What makes a “good” business?

SM: A good business is one where you have a competitive advantage. It could be a better brand, better product, a better service; anything that puts you a cut above the rest.  It’s what Warren Buffett calls “a moat”. My partner and I have also have something we call a CAP—a competitive advantaged period — which I would love to eventually explain to you, but it would take way too much time for this interview.

Typically my company and I invest in and operate knowledge-based businesses, like software companies. Software companies have recurring contracts, so you do not need to sell and resell the client all the time. Once you get him, if you give him good service, he stays.

Q: So what makes a bad business?

SM: In my opinion, a bad business is one where there are serious consequences if you fumble. Retail for instance. Whereas our software costs virtually nothing to manufacture and can be put, with slight alterations, to many different uses, retail stores need to purchase expensive merchandise and then resell it marked up. If they’re not selling, selling, selling, they’re losing money. This makes them extremely vulnerable, even though they can be extremely profitable, especially since they scale worldwide if they are good operators with a good product.

Q: Sometimes the product sells like hotcakes, other times it goes to waste, and the bill is still theirs to pay.

SM: Exactly. Our product never goes to waste, and even if it did, it wouldn’t be a great loss. The backend of our software is the same, so production costs are kept low. All we need to do is tailor it to the customer and make the sale. It’s infinitely sustainable.

Q: Despite you’re into the DNA of a good business, have you yourself ever had a bad business?

SM: Yeah. I owned and operated my own gym for a few years. The gym model is pretty flawed. Not only is there enormous competition, but it’s also really hard to differentiate yourself from the next guy. Aside from the classes you provide, there can’t be that much variation: you got free-weights, you got machines, you got cardio equipment. The only advantage you can get is convenience, but even that is volatile because of how mobile people are these days.

Q: You said earlier you wanted to be just like your dad. Are there any Canadian businessmen aside from him that you admire?

SM: Absolutely. I admire the business savvy of Alain Bouchard of Alimentation Couche-Tard. He took the Quebecois-specific notion of the “depanneur” and internationalized it. Now there are Couche-Tards in Quebec, Mac’s in English Canada, CIRCLE K in the States, and Statoils in Scandinavia. And just think about how hard it is to differentiate yourself in that industry, where convenience is almost literally the name of the game.

I also have a lot of admiration for Mark Leonard, the CEO of Constellation Software. Bouchard is a hawk, but Leonard is a visionary of impossible self-discipline.

Q: So ambition, hard work, and discipline – could that be called your business philosophy?

SM: Broadly, but no more than you could say that’s any businessman’s business philosophy.

Q: Then what’s your personal business philosophy? Your approach?

SM: I try to grow my business while maintaining profitability. I’m not a venture capitalist. I’m not going to hire ten people and hope to make a profit from it. I try to foresee and minimize the mistakes. I’m more of the type to try something on a sample section and, if it works, to scale it up fast.

I also realized early that my partners and I are not first-movers, or “inventors”. We take an idea after it has shown itself to be viable and we improve on it. A lot of business models or products are full of flaws. All you have to do is find them and once you do, the money is there.

SM: Oh, and another thing is I like to have fun with the people I work with. I spend more time at work than at home or doing anything else, so it’s important I enjoy it.

Q: Thank you so much for chatting with me today.