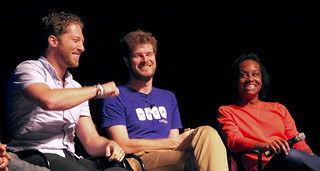 The north has been hacked, again.

After an exciting caffeine-fuelled weekend, teams pitched Sunday, Sept. 20 at the second annual Hack the Northclosing ceremony. More than 1,000 students from across the globe came together to build over 36 hours at the University of Waterloo.

The largest hackathon in Canada, the event featured an expert panel presented by Y Combinator and workshops and mentorship from big names like Google, Shopify and PayPal, plus locals like bitHound and Magnet Forensics. Hackers were treated to local catered food, sponsorship swag, therapy dogs and all the RedBull they could consume.

But stronger than the caffeinated buzz was the sense of support and camaraderie between hackers. It was an opportunity to meet talented, like-minded people from around the world to solve problems, have fun and make great things together in Waterloo Region.

“Encouraging collaboration, not competition, is our core value,” said Kevin Lau, co-founder and co-director of Hack the North. “All of the finalists are winners at Hack the North.”

Twelve finalists were awarded their choice of iPads, Xbox game consoles and smart watches for their talent, hard work and quick, creative building. Finalists’ hacks included: Wayst, a wearable device that vibrates when cyclists become too close to obstacles; Stokr, a solution to enable Windows video games to be played on Mac computers; and Hash, secure software to store and connect all your passwords on your computer with your smartphone for fast, streamlined access to webpage logins. There was even a drone-Oculus Rift combination hack built by Soroush Ghodsi, the event’s youngest hacker at 13 years old.