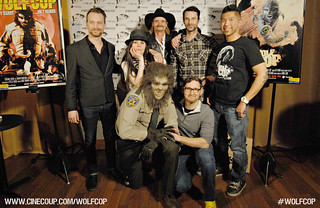 In a world where Entertainment Weekly reads: “This is an actual thing!” and Moviefone says “Looks…interesting”, it would seem like CineCoup’s triumphant first feature was being damned with faint praise.

But for every mainstream media outlet that doesn’t know what to do but laugh for the the Vancouver-incubated, Saskatchewan-made horror-comedy, there’s a hundred hungry fans.

With its release date of June 6th just announced–though Torontonians can expect the film’s debut a week later, to coincide with the month’s full moon–the WolfCop word is spreading far and wide. It’ll be shown at Cannes this May, represented by Raven Banner Entertainment.

The Canadian distributor has a lot of experience with similar titles (if those can be said to exist), having marketed 2012’s A Little Bit Zombie and this January’s John Dies at the End, a fantasy-horror-comedy featuring Paul Giamatti.

“They’re a great organization, they really understand the genre space,” says J. Joly, the founder of CineCoup. “They’re super enthusiastic about it, and it’s great because we have the US and foreign open. We managed to finance the picture just based on broadcast, we’ve got a nice little advance, which is rare, and it affirms their support for the movie. And we’re arming them with really great collateral that I hope we’ll come out of Cannes that we can sell, potentially more than any other Canadian film! We’re loading them up with metrics, telling them where the views are coming from, places you wouldn’t expect, Croatia, Colombia. And so when they approach those markets, they can say that they already have fans there. It used to be compared to packaging (who’s in it) and comparables (what movies is this new movie like), and this doesn’t have to be. We have the base-line fans, and they’re attracting most. Since we’re starting here before going to the states, we’ll know what works, and get a bigger win.”

Lowell Dean, the film’s director, is humble. “The fans, they say things like ‘the whole history of cinema has been leading up to this moment’. ‘I know there’s a god because WolfCop exists’. Even if it is ridiculous, people are coming back with the energy that we’ve been putting out. We take our character seriously, but we acknowledge that this is a silly title. And hopefully you’re engaged and a little surprised by how good a movie called WolfCop can be.”

Fans are engaging in droves. The trailer’s been online for four days, and won over 120k hits through word of mouth–there’s no WolfCop bus-stops, no billboards to be found. Twitter’s abuzz with WolfCop, with 6.6 million mentions on the network.

Joly attributes this to the team.

“I really like WolfCop, and more importantly–an entrepeneur invests in entrepreneurs. They were hard workers, and achieved high levels of quality, and the stuff they did–they were the only film that bought a booth at Calgary FanExpo. They were just back there a year later, and they showed that entrepreneurial spirit. Lowell and his team really connected with people.”

Their IndieGoGo campaign was used as a gift store–the store reached ten thousand dollars in sales in two weeks, and Dean reports that the action figure is all sold out.

“I hope more movies. This is a passion I’ve been working towards for decades. To get this opportunity—I would love nothing more than to do another WolfCop or another bizarre idea. And if people connect with WolfCop, I’ll feel validated that there is an audience for these things.”

Joly can safely say that WolfCop has CineCoup’s full support.

“WolfCop has our full support, and we want it to have a long life. We’re working very hard to have another good news story.”

TeleCoup, the television equivalent of CineCoup, is in the works, and will be the search for the next single-camera comedy. CineCoup will be announcing details about its second cycle closer to the release of WolfCop. To this years’ participants, Dean offers this advice.

“Start preparing now, and don’t underestimate how much work you’ll have to put in. This is not a 9-5. You have to really want it.”

Really wanting it is the first step to really getting it. If you’re interested in seeing WolfCop or participating in this year’s competition, keep an eye on the CineCoup website.