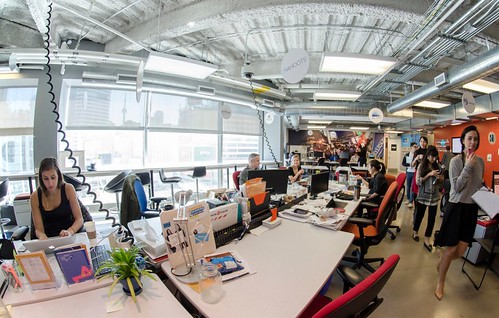 The DMZ at Ryerson University has been ranked the leading university-based incubator in North America by UBI Global, a Stockholm-based research organization that specializes in benchmarking incubation programs.

Up from second place last year, the DMZ was ranked the highest among 60 programs of its kind in North America.

“The DMZ is at the forefront of Canada’s efforts to grow the digital economy by empowering young people and giving them tools necessary to succeed,” said Abdullah Snobar, Executive Director of the DMZ.

The benchmark looked at more than 50 performance indicators, and the DMZ scored highly in areas that included talent retention, economy enhancement and post-incubation relationships.

Five years after launching, more than 200 startups have incubated at the DMZ. They have collectively raised over $120 million in seed funding and have fostered the creation of 2,000 jobs.

“It is an honour for the DMZ to be named the top-ranked university incubator in North America,” said Sheldon Levy, President of Ryerson University.

Some DMZ success stories include Figure 1, a medical professional photo-sharing app; SoapBox, an innovation and employee engagement platform for large enterprises; and DreamQii, a robotics company.