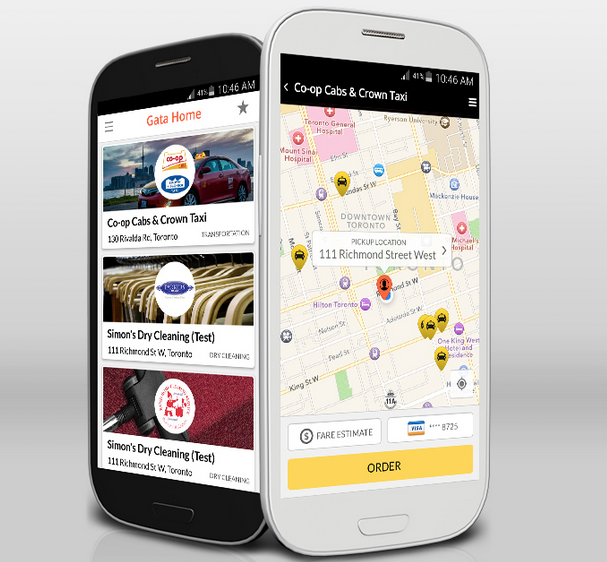 For small local businesses, mobile can be more of a challenge than an opportunity. Business owners have to understand the technology and trends or hire someone who does.

Even then, building a quality app means a major investment with a big risk, something that a lot of small businesses just can’t afford.

His company is trying to change that paradigm and it’s taking on Uber to do it.

Gata allows users to call a taxi, see where it is while they’re waiting, and to pay in-app. On Thursday, it launched in Toronto, partnering with the local Co-Op Taxi.

Toronto isn’t Gata’s first city. It can already be used hail a taxi in 100 markets across North America.

“The taxi industry is under a lot of pressure and they’re looking for a solution that will provide a similar experience [to ride hailing apps] but legal,” Yao says.

But Yao doesn’t want to stop there.

“The sole purpose of Gata is to level the technology playing field for local small and medium businesses,” Yao says.

After all, “there’s a Uber in every industry,” he says

But Yao doesn’t plan to stick to the taxi and dry cleaning industry industry. Eventually, Gata “will allow any business to have their own experience on mobile.”

Rather than building separate apps, Gata’s app, the Gata Hub, puts it all in one, showing users local business at their location.

Right now, that allows users to hire a cab in any of the 100 cities where Gata has a deal with a local taxi company without having to download any additional apps.

But as the company targets more industries, that’s set to expand.

Yao says that with crowded home screens, consumers don’t want to download an app for a business they might not patronize very often.

Yao says the “end goal is service coast-to-coast across the U.S. and Canada.”

In addition to Toronto, Gata is already in a number of Southern Ontario cities, including Kingston, Waterloo, London, Niagara Falls and Oshawa.

Gata charges taxi companies and other businesses to be on the app.

“We are their tech arm,” Yao says.

The company has already raised a seed round of over $1 million (Yao won’t say exactly how much).

“Would I bet on some software developers to build a better company?” he says. “Or would I bet on a company that’s been doing it for 50 or 60 years, enabled with the same technology?”