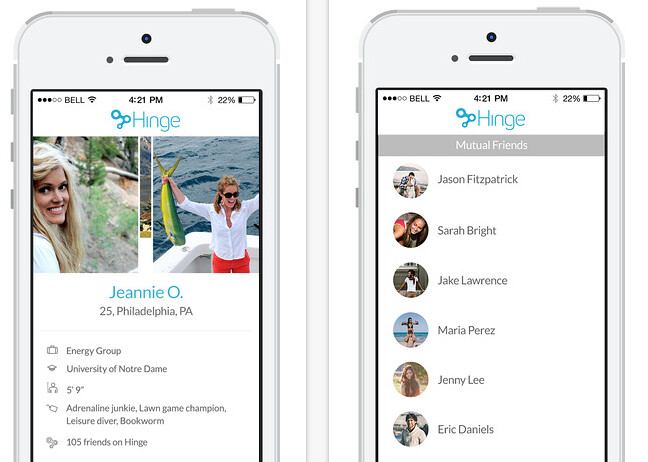 Social dating app Hinge, which has grown in popularity in the United States, is now expanding to Canada.

On Thursday the app, which leverages Facebook to only connect people who are already friends of friends, launched in Toronto.

“We hit the point where we’d hit most of the big cities in the U.S.,” says Justin McLeod, Hinge’s founder and CEO.

Toronto is the second city outside of the U.S. where the app is usable. It expanded to London, England last week and a launch in Sydney, Australia is in the works.

“The main focus for 2015 is international growth,” he says.

Because the app requires existing social networks to connect people, McLeod says the initial locations outside the U.S. were chosen because there are already strong networks between those cities and American cities where the app is already popular.

When it comes to expansion “we’re really about quality over quantity,” he says. “We want a lot of people on the app.”

The app is available in 45 U.S. cities and while McLeod won’t say how many active users it has, he says it grew five-fold last year.

According to Hinge, an average of 35,500 dates are set up through the app every week.

So what sets it apart from the standard Tindergrind?

“It’s much more about dating an relationships,” says McLeod. “It’s not just a game that you play on your phone.”

He says that because it uses existing social network profiles, “it’s a much more transparent environment” and because people who are matched on the app have existing connections, it “adds an additional layer of accountability.”

He says the friend of friends connect is much more like how people meet in real life and can be much more relevant than random matches on “hook-up apps” and doesn’t require users to fill out long surveys like traditional dating sites.

While it may reflect how people meet naturally it’s much more efficient McLeod says.

“There’s just not that many opportunities,” like weddings and dinner parties, McLeod says. As well the app matches users with “20 people a day, which is way more” than they could meet in real life.

Hinge, which has raised $20 million in venture funding, is free to use and is not yet monetized.