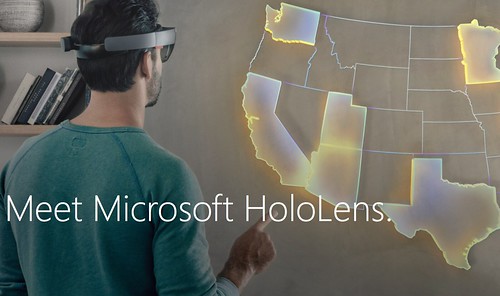 Recently I had the chance to try Microsoft’s newest technological breakthrough, Hololens. My world changed.

Until now, we had two options for creating content in a virtual way; Virtual Reality (VR), which immerses the user into another world completely separate from the real world they are in, and Augmented Reality (AR), where you use a phone, tablet or other screen to show objects that are not really there.

Hololens takes AR and VR and puts them together to create a seamless virtual experience within the real environment you are in.  This is referred to as Blended Reality (BR), defined as the combination of virtual and real world’s to create a new and unique experience in any environment.

Before the demo, I was asked to put my phone away thus ensuring that I don’t take any photos or videos. Hololens is so new, no one knew anything about it. “We don’t know yet” was an answer I got a lot from the Microsoft team in Toronto. This technology was first introduced 8 months ago at the BUILD conference in San Francisco.  Since then, the Hololens has been on tour stopping at major cities around North America.

I sat through a three-minute introduction video that explained how to mount the Hololens on my head for the perfect fit and how the gestures worked.  The video was simple and self-explanatory.  When it was my time to go in, I was escorted into a small room that reminded me of a stylish doctors office.  The Hololens was strapped on my head and I was told to look at a single point in the room for the Start menu.

Getting your focal point is easy, simply look at what you want to and align the dot in the middle with the object.  Hololens does use a new gesture system for selecting menu items.  Begin by holding your index finger up as if to shoosh someone then tapping that finger like clicking a mouse only more animated.  This is what Microsoft calls a “finger tap.”

After starting, the system asked me to manually “scan” the room. I turned around 360 degrees while the Hololens projected red wireframes on the walls to let you know that it was mapping the room. I assume that this was actually scanning and not pre-programmed to the room.  This real time spacial mapping was the thing legends are made of. It was precise, accurate, smooth and did I mention, real time?

The potential for this type of mapping is massive.  From soldiers instantly mapping a combat room with alerts to threats to choosing new furniture visualizing everything in your home.

I hadn’t even begun the game and I was so pumped about this technology.

The game started and the sound, while quiet, was clear and distinct.  The sound was actually impressive and also had something else that set it apart from any other device.  The sound for the Hololens is stereoscopic meaning it is 360 degrees combined with depth.  If you hear a sound behind you that sounds five feet away, you turn around and it is there exactly five feet away.  Mind-Blown.

Now I am into the game, called Xray and I am the first person shooter. There is now a target ring in the exact middle of my view so if I look at something directly, I can shoot it.  Let the alien blasting begin!  So this is where Hololens takes things up a notch.  With that Tap motion I described earlier (like clicking a mouse) you can fire your photon torpedo and blast the enemy Queen’s drones.  Crash, I hear what sounds like a brick wall being smashed in, I turn to my right and I see a huge metal claw has smashed through the brick wall and drones are pouring in.  Blast Blast, they are firing back…red photon cannon balls come hurling toward me and smash me in the face, not good.

My Hololens seems to be cracked and damaged as all the lights dim and it gets darker.  I guess I didn’t make it. But suddenly, I am back to full brightness and the cracks have gone. The demonstrator says, you need to duck to avoid enemy fire. I do this and no more red photons in the face. Time to start blasting again.

Voice commands, real time spacial mapping, 360 degree stereoscopic sound, Finger accurate gestures, and all without the need for a computer or cables.

While games are a most popular first use for this technology, I predict widespread application using Hololens technology for logistics, training, medical, manufacturing, military, marketing, education, athletics, leisure, recreation and entertainment.  There really isn’t any part of human existence that won’t be impacted by this technology.  In my opinion, Hololens is as important as the television was to human society.