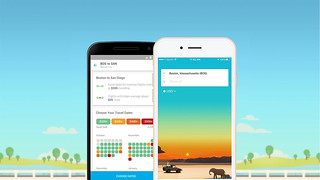 The airfare app has raised $16 million in a growth funding round led by BDC Capital IT Venture Fund, in addition to existing investors OMERS Ventures, Accomplice (formerly Atlas Venture) and Brightspark Ventures.

This brings Hopper’s total funding to date to $38 million. According to today’s announcement the new funds will fuel Hopper’s continued growth and support their hiring efforts as they expand in both Montreal and Cambridge, Massachusetts.

Hopper’s app is currently one of the top five travel apps in the Apple store. It was released in 2015 after several years of offering web reports and archiving flight data and has about 3 million downloads so far on iOS and Android combined.

The app trawls through millions of flight data points daily in an attempt to find the ideal time for users to book a flight. The data is presented to user via a color-coded calendar that identifies which days are expensive (red) and which are cheapest (green) to travel.

In addition to the funding news, Hopper announced that American Airlines fares will now be available through the Hopper app. American Airlines and American Eagle offer an average of nearly 6,700 flights per day to nearly 350 destinations in more than 50 countries.