According to the data, 37 per cent of players in U.S. broadband households are Roku-branded, up from last quarter. This places Roku ahead of all competitors, including Amazon, Google and Apple.

“Roku emerged early as a US market leader for streaming media players, and the company has held firmly to that position,” said Glenn Hower, senior analyst with Parks Associates.

Amazon Fire TV increased its share to 24 per cent, up from 16 per cent, which places it ahead of Google Chromecast at 18 per cent. In fourth is Apple TV, with 15 per cent of the market. 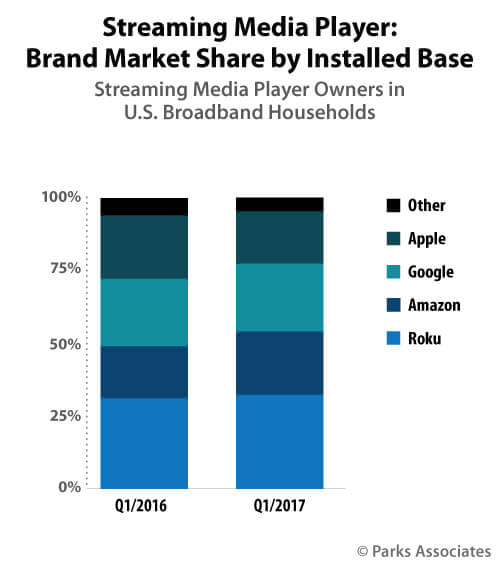 “Higher-priced devices, such as the Apple TV, have not been able to keep up with low-priced and readily available Roku devices, which can be found at Walmart for as low as $29,” noted Hower.

Parks Associates estimates 15.6 million smart speakers with personal digital assistants were sold in the US in 2016.