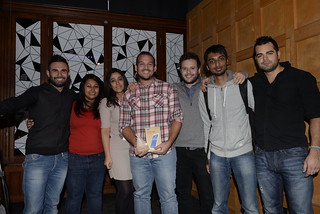 A new wave of IoT companies got their start in Toronto over the weekend at Startup Weekend Toronto: Internet of Things Edition.

The 54-hour event brought together makers, designers, developers and entrepreneurs to share ideas and launch new businesses. Teams spent the weekend talking to potential customers and building product prototypes before presenting to a panel of judges on Sunday afternoon.

Judge Natasha Baker, founder of SnapEDA, spoke about the importance of events like Startup Weekend for fuelling innovation in the IoT space.

“By 2020 there will be over 50 billion connected devices as part of the Internet of Things,  and a lot of innovation in the space is coming from smaller companies and startups,” she said. “Broader connectivity is the next wave of innovation in computing, following on from mobile. That makes events like Startup Weekend, which give entrepreneurs a platform to vet their ideas, so valuable.”

She was joined on the judging panel by Karl Martin, CEO of Bionym, Matthew Leibowitz of Plaza Ventures, and Ian Collins, founder of Crowdcare Corporation.

They selected Vello, creators of a smart vent to control temperature in the home, as the first place team. The Vello team impressed judges with their prototype for a simple, beautiful honeycomb vent that could be opened or closed via an iPhone app.

Joey Piro, who originally pitched the idea for Vello, stressed the importance of teamwork when launching new companies.

“This weekend I learned the importance of having faith in those around you to help you execute on your vision. Vello was only possible because of how well our team meshed and worked together as a unit,” he said.

Second place was StoveAlert,  a lightweight smart device that detects stovetop temperatures and alerts you of changes before an accident occurs. myMouse, a custom-built ergonomic computer mouse designed to fit the hand of an individual user, took third place.

Event sponsor VitaminWater awarded ExploreTO their special “doer” award, given to the team they thought worked the hardest over the weekend. ExploreTO is a curated, pre-paid subscription services for experiences that helps people try something new each month.

Startup Weekend Toronto is just one of 250 Startup Weekend events taking place during Global Entrepreneurship Week. Teams in Toronto will now go on to compete against entrepreneurs from other regions in the Global Startup Battle, the world’s biggest startup competition. Prizes for the champions include tickets and travel to GEC in Milan, LAUNCH in San Francisco and a media tour in New York City.

Toronto startups have an impressive track record in the Global Startup Battle, winning the competition in both 2013 and 2012. Last years winners, Pawly, created a robotic chew toy that gives dog owners a new way to interact with their pet. Pawly is currently preparing for the public launch of their product.