The Vancouver-based company bought Shoes.com from Brown Shoe Company, a $2.5-billion publicly traded footwear firm based in St. Louis. The value of the transaction was not disclosed, though we’re hearing estimations between $55 million and $65 million.

For SHOEme, the acquisition is another part of its aggressive growth plan. For Brown, it’s an opportunity to invest more resources into its other brands, such as Famous.com.

“While Shoes.com has been a beneficial part of our company, we believe now is the right time to focus our attention on Famous.com and our branded wholesale ecommerce sites, as we continue to expand and invest in more strategic omni-channel, online and mobile efforts,” said Diane Sullivan, CEO, president and chairman of Brown Shoe Company.

“Shoes.com has a strong history with top-tier brands and a commitment to providing an unparalleled shoe-shopping experience,” said Roger Hardy, CEO of OnlineShoes.com and SHOEme.ca. “Shoes.com’s experience in the industry will be invaluable to all of our brands, as SHOEme continues its rapid expansion.” any obligation or plan to update these forward-looking statements, even though its situation may change.

As CIO, Lee will be a key contributor, responsible for leading and enhancing SHOEme’s information technology capabilities as they continue to expand and invest in their rapidly growing online retail platform.

“OnlineShoes.com and SHOEme.ca continue to grow at a rapid pace and we need someone who understands our needs from a technical standpoint to help guide the way,” said Roger Hardy, CEO of SHOEme.

“Peter was very successful in spearheading and creating a leading technology platform for Coastal.com and will be invaluable as we look to enhance the leading technology and information platform in the $125 billion athletic and comfort categories,” he added. “It’s exciting to get someone of this caliber to join our team in this critical role.”

Lee comes with a wealth of experience and brings with him more than 18 years of progressive leadership in the online and technology services arena. Most recently, Lee was the CEO and managing director at LensWay, a wholly owned subsidiary of Coastal Contacts. As CEO, Lee was responsible for all P&L and Operations functions.

RELATED: ShoeMe Reaps Benefits of Identifying a Problem and Solving It

Prior to his role at LensWay, Lee was Chief Technology Officer at Coastal Contacts where he led the company’s overall e-commerce and supply chain platforms. Lee has also held technology leadership roles at Intuit, Netflix and Oracle.  He holds a B.S. in aeronautical and astronautical engineering from Ohio State University.

OnlineShoes.com and SHOEme.ca merged in July 2014 after being acquired by Hardy Capital Partners for an undisclosed amount. The combined entity has more than 250 employees across North America and offers a selection of more than 350 shoe brands and 35,000 different shoes serving more than 1.5 million customers shoes this year.

Lee will be joining an impressive team at SHOEme and OnlineShoes. He will also rejoin many of his former teammates from Coastal.com including: Roger Hardy, CEO; Nick Bozikis, CFO; Sean Clark, President and Co-Founder at SHOEme; Curtis Peterson, CMO; Dominic Uy, CTO. 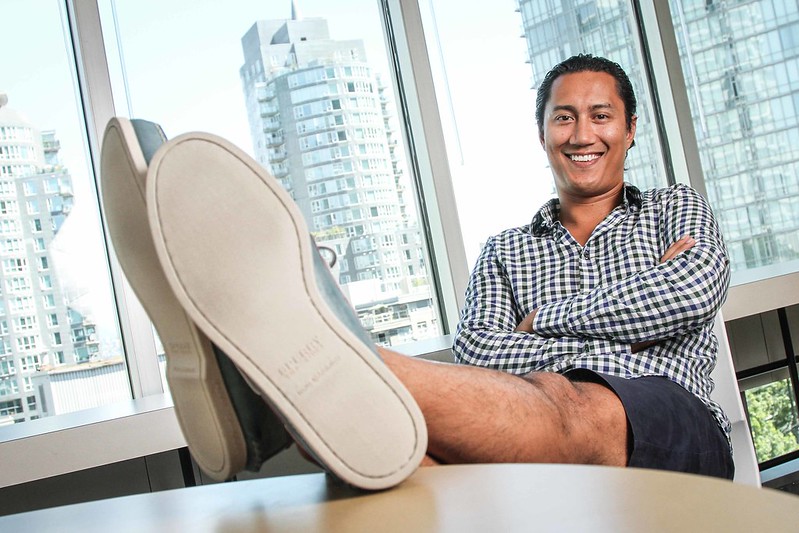 It has been a fast and exciting ride so far for Sean Clark and his local startup ShoeMe.ca.

Clark’s mission since he started the company two years ago: help Canadians find the perfect fit in footwear in an underserved market. And on the way to that goal, ShoeMe has abruptly grown a few sizes itself.

The company proved its place as a contender with the July 15 announcement that Roger Hardy, founder and former CEO of Coastal Contacts had acquired ShoeMe and OnlineShoes. Hardy is merging the two entities, leaving Clark – his former employee at Coastal – in the position of president for Canadian operations.

A move from their original office on Cook St. this July took Clark and the original ShoeMe startup from his parents’ basement suite in 2012 all the way to the fourth floor of 1500 West Georgia St.

“Now that we’ve purchased OnlineShoes, everything has changed,” says the 33-year-old. “I’m very much a part of the ecosystem, and people know that ShoeMe is here to stay so they’re looking to do business and develop relationships.”

It took persistence to grow the company to it’s 50-member, mostly 20-something staff. Clark credits the e-commerce experience he accumulated when he ran the Australian operations of ClearlyContacts for that growth. He remembers when there was no money for inventory, and distributors were slamming doors in his face at shoe shows.

With those doors now wide open, the firm is set to have over 300 brands on the site within the next month.

The mighty Zappos to the south has nearly 1,200 brands on offer, with more on the way. However, the online retailer stopped shipping to Canada in April 2011, citing their inability to “deliver wow through service” to their northern neighbours.

Clark says his U.S. counterpart didn’t adjust to Canada’s idiosyncrasies. Shipping in a large and sparsely populated country, as well as needing French-friendly service took a toll on Zappos.

It was the American retailer’s abandonment of the Canadian market that helped spark Clark’s entrepreneurial spirit into filling the online void.

“I regularly had to drive down to Blaine to pick up shoes that my wife would buy off of Zappos or Amazon,” he says. “Canada did not have an online footwear retailer and I looked into it and every other advanced economy in the world did.”

With seed investment from Hardy, Clark made ShoeMe what it is today, and he’s determined to succeed where Zappos failed.

“All we do is live and breathe Canada. Everyday we provide better service and better selection to Canadians.”

The domestic e-commerce market is under-penetrated, according to Clark. With only two per cent of total Canadian footwear purchases made online in 2012, the country was about 15 per cent under the advanced economy’s average online shoe-shopping rate. Those numbers represent a huge opportunity for a domestic online retailer like ShoeMe, and Clark shows no signs of slowing his pursuit of market share.

Although busy with the move and acquisition, he’s focusing his team on creating a fashion platform and bringing more quality brands to customers with otherwise limited access.

“We’re creating amazing experiences for customers to get head-to-toe solutions, whether they’re outdoor running, or whether they’re going out for the night Friday… or whether it’s a skateboarder,” says Clark. “We’re just getting started in my opinion. We want to be a household name here in Canada, so we’re working hard to achieve that.”

ShoeMe was listed in June’s TechVibes 20, a curated list of the most promising tech startups in Canada today.