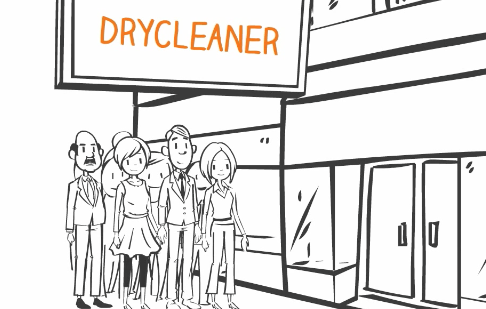 While many brick and mortar businesses are feeling pressure from online competitors, the dry cleaning industry seems largely immune. Customers still have to drop their clothes off in person and many shops don’t even have a website.

“It’s a very undisrupted industry,” says Talal Jandali, the co-founder and CEO of Simply Laundry, a Toronto-based startup that’s injecting a bit of technology into the laundry business.

The company’s offering is pretty simple – it picks up a customer’s laundry, has it done and delivers it back to their building within 48 hours. Customers notify the service when their laundry is ready using an online tool and billing is done automatically.

Jandali says the idea is to give his cutovers more time to do the things that matter to them, instead of taking their laundry to the dry cleaners.

While the service is relatively new – it’s currently only available at 31 buildings in downtown Toronto – Jandali says its seen “phenomenal growth.”

“Once a customer comes to us, we have 100 per cent retention,” he says.

Getting to that point wasn’t easy, though.

“I never understood how hard it is to actually gain a customer,” he says. “Customer acquisition was very tough at first.”

He’s also had to adjust his offering, adding a wash and fold service to the mix. There’s also been higher than expected demand from women. Jandali says he most of his customers wouldn’t be men but women now make up around 40 per cent.

Jandali might be new to the laundry business but he’s not new to the business world. He previously worked as an investment banker and started an advertising firm in the Middle East, which he sold before pursing an MBA at Toronto’s Schulich School of Business.

It was there that met his co-founder and first got the idea for Simply Laundry.

Jandali says he was trying to launch a flyer app, which would allow customers to find the best deals on groceries but couldn’t figure out how it would generate revenue. On a trip to visit a cousin in Manhattan, Jandali says he saw a similar concierge dry cleaning service at work and the seed was planted.

“A lot of things start off in the U.S.,” he says. “Everyone thinks that in New York they have more money, they have more time, but here in Toronto it’s almost the same.”

While Jandali says he knows that competition is coming, he’s planning to be ready for it. He’s also looking at further expansion though he says he doesn’t want to grow too fast, instead focusing on understanding his customers and the market.