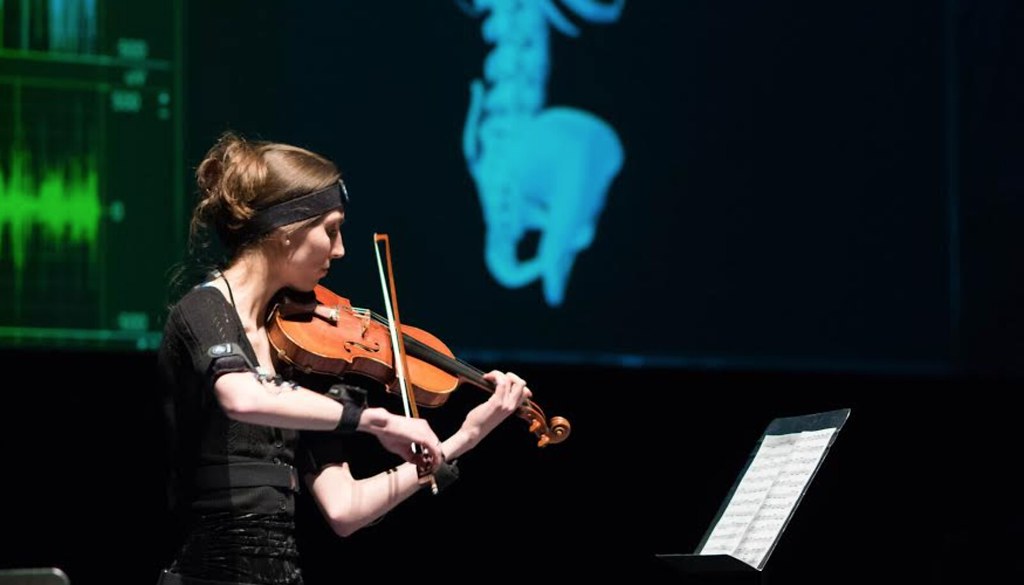 The University of Toronto put on a show yesterday at MacMillan Theatre that married some of the world’s most innovative technologies with perhaps one of the oldest human creations: music.

Before the show started, there was something of a science fair outside the seating area. The projects had varying degrees of complexity and consequence. One booth, for example, was presenting the findings of a pilot study on how certain tones affect a brain afflicted by alzheimer’s, another made instrument noises when you tapped the buttons of a Nintendo controller, so people could compose while they played Street Fighter.

Once everyone was seated, a woman walked onto the stage with her violin. She played Bach, and wouldn’t have been out of place at U of T’s faculty of music had she not been worn accelerometers around her head, elbows, wrists, and waist. Another part of her performance that was an atypical accompaniment for classical violin was the projection of her skeleton, moving and swaying as she did, directly behind her.

The explanation came shortly after, when Dr. John Chong gave a brief account of the kinds of injuries high level musicians suffer, and how technology like the violinist’s was wearing is being used to combat these issues.

The next presentation was from Dr. David Alter and Jeff Wolpert. The two were explaining the results of a proof of concept study relating to music, exercise, and wellness. In the study, three groups of cardiac rehabilitation patients listened to different types of music to see how that would affect their commitment to exercise. The group that performed the best had specially curated playlists of their favourite artists. This music itself wasn’t important, but the beats per minute of the songs were. All the participants had songs from their favourite artists, but only songs that fell within ten beats per minute of the recommended pace of their exercise. Over three months, that group exercised 300 minutes a week more than the control group, which if that pace lasted, would amount to an additional two and a half years of life, all for the cost of $75.

The following presentation had less to do with music than those before it, but more to do with sound frequencies, specifically, the 40 Hz tone. Forty hertz is significant in the brain because that tone helps the neurons communicate with each other. Professor Lee Bartel presented the findings of several studies that showed administering the 40 Hz tone through a specially designed chair had helped people with alzheimer’s and fibromyalgia.

The most dramatic figures came from the small pilot study of alzheimer’s patients. Eighteen people (six with mild alzheimer’s, six with moderate, and six with severe) were administered the tone through the chair for only ten treatments already saw improvements on standardized alzheimer’s tests.

Bartell told the story of one patient who had alzheimer’s who did the treatment for three years using the specially designed chair and a product called the VTS-1000, which is a mat that also emits the 40 Hz tone. After three years, that patient had shown no signs of deterioration.

The tone is especially helpful with alzheimer’s because of the valuable communication that happens within the brain at 40 Hz, since alzheimer’s is, at its most basic, the long term memory having difficulty communication with the short term. The furthest implications, and some of the most pressing questions of this therapy have yet to be tested, like would it work through ear phones, and can it cease the progression of alzheimer’s, but Bartell is optimistic.

“We like to think this treatment can slow progression, and perhaps halt it,” said Bartell.

Sarah Forestieri, an opera singer, was next on stage. After a quick performance, she sat while her vocal chords were examined, and the live video was projected on to the big screen behind her. The demonstration was to show how singers need to get evaluated, and how vocal chords work. It was graphic, like a video shown in grade nine science class, but still an interesting look at vocal chords in action.

The final presentation was from Dr. Michael Thaut, who spent the past 20 years studying rhythm’s effect on the brain. People with parkinson’s and a dysfunctional gait can be trained to walk to a beat, to the point of being unrecognizably improved after several training sessions. People with developmental issues can be trained to play drums cooperatively in unison, when the same group would have trouble exercising any kind of group activity. This is all because of the unique relationship between rhythm and the brain. The brain reacts to rhythm very strongly, especially when there is both a tactile and auditory signifier for each beat. Like the 40 Hz tone, which also has rhythm, though it’s too speedy for the human mind to decipher the beats, rhythm helps different areas of the brain communicate with each other.

The practice also works with extremely high-functioning brains. Germany’s rowing team, who won gold in the 2012 Olympics, used a similar method of training to synchronize the rowers.

The next area of expansion for this field is research into autism research. When a person with autism is spoken to, the speech area of the brain usually doesn’t show much activity, where as a person without autism would show immediate signs of an active linguistic centre once they heard language. How that can be changed with rhythm and music, “remains to be seen,” said Thaut.