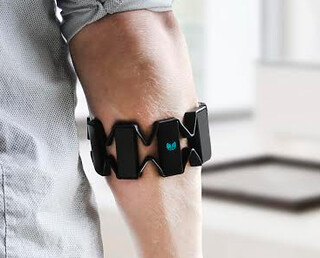 The state-of-the-art industrial design is a thin, expandable band, which is nearly half the thickness of the Myo Alpha units that were given to select developers and partners over the past six months.

Weighing in at less than 95 grams, the final Myo armband weighs less than the average male wrist watch. As the device requires direct contact with your upper forearm, this design allows you to wear it comfortably under clothing, all day long.

SEE ALSO: 2013 Startup of the Year: Thalmic Labs CEO Stephen Lake on the Future of Myo

“Our team has put countless hours into creating the sleek design we’re showing today, as well as the technology inside of it,” said Stephen Lake, CEO and Co-founder of Thalmic Labs. “This final design is rugged, while also being lightweight, making it easy for the Myo armband to become a part of our everyday lives.”

Product development of the Myo armband began in the spring of 2012. Over the past two years, the look of the product has evolved from early 3D-printed prototypes to the production design shown today.

The technology has advanced at a rapid rate as well. Thalmic Labs developed a new type of muscle activity sensor from the ground up, made countless advances in gesture recognition algorithms, and developed a robust one-size-fits-all industrial design that will accommodate ages twelve and above.

The Myo armband is the first gesture-control technology of its kind. Instead of relying on cameras or voice control, the Myo armband measures electrical activity in your muscles, giving you the ability to wirelessly control and interact with computers and other digital consumer products around you using simple, natural movements. The device also has a highly sensitive 9-axis motion sensor to detect all of the motions and rotations of your forearm.

Thalmic Labs’ developer program has piqued the interest of over 10,000 developers, who have applied to create applications that are compatible with the Myo armband. Using the Myo API, third-party developers can configure the Myo armband to an endless number of applications using a Bluetooth connection.

Among other things, the Myo armband can be used as a controller for home automation and entertainment, to seamlessly replace presentation remotes, to interact with video games and heads up displays, and as a tool for controlling robotic devices and toys.

Thalmic Labs will begin shipping pre-orders (available for US $149) of the Myo Developer Kit next month, with the remaining, non-Developer-Kit, pre-orders shipping in September. All pre-order units will have final hardware. The product will then become widely available for real-time purchase in the fall of 2014, in time for holiday shopping season.