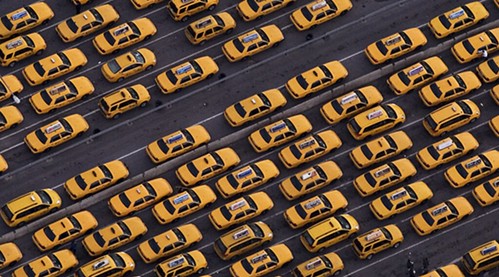 Uber isn’t just taking business from taxi companies, it might also be creating a new market, according to a new report commissioned by the City of Ottawa.

The report, prepared by the Mowat Centre, a think-tank at the University of Toronto, found that ride-hailing services like Uber aren’t just serving customers who would have otherwise taken a taxi, in-fact they may be increasing the overall number of hired rides that people take.

“While it is too early to draw firm conclusions on this question, the evidence to date suggests that both displacement and complementary effects are taking place (depending on the clientele and location),” the study’s authors, Sunil Johal, Sara Ditta and Noah Zon, write.

Looking at data collected by The Economist comparing the number of Uber and taxi rides in New York City between 2013 and 2015, the study concluded that while Uber was taking business away from cabs in Manhattan, “the rest of the city actually saw more rides take place overall and little impact to the business of licensed cabs.”

The report attributes this increase to the markets that ride-hailing, sometimes referred to as ride-sharing, companies target.

“Uber, Lyft and other ride-sharing services have responded to the needs of customers that previously had difficulty receiving services, including those in more remote locations and with lower levels of income. Despite similarities between taxis and ride-sharing, there can be marked differences in the characteristics of users and their experiences – with ride-sharing ultimately
encouraging greater mobility for certain groups of users,” the report says.

“Another study found that Uber provided more reliable and cost-effective services to low-income neighbourhoods in Los Angeles that were not well served by public transit, when compared to taxis,” according to the report.

While no hard data exists for Canada, in part because Uber remains secretive about ride numbers, basic economics would suggest that since Uber’s prices are often lower than those of licensed cabs, the size of the market would increase.

The Mowat Centre study found that price is the main factor for people to choose Uber over taxis, not dress codes or courtesy gestures.

“According to a recent survey in Toronto, a key reason residents choose to use Uber is because it offers more affordable pricing than taxis and limos and, in some cases, public transit,” the study says.

It makes sense. If the bus is $3.25 and a taxi ride is $20, a lot of people will chose the bus because they don’t think the taxi fare is worth it or they can’t afford it.

But add a price-point somewhere in the middle, especially one that the consumer knows in advance, and you reach a new market – those people would pay more than the bus for a higher level of service but can’t, or won’t, pay as much as a taxi charges.

It explains why the taxi lobby is so intent on playing up the alleged dangers of Uber. They want people to be thinking about other things than price when they’re decided how they’re going to get from point a to point b.