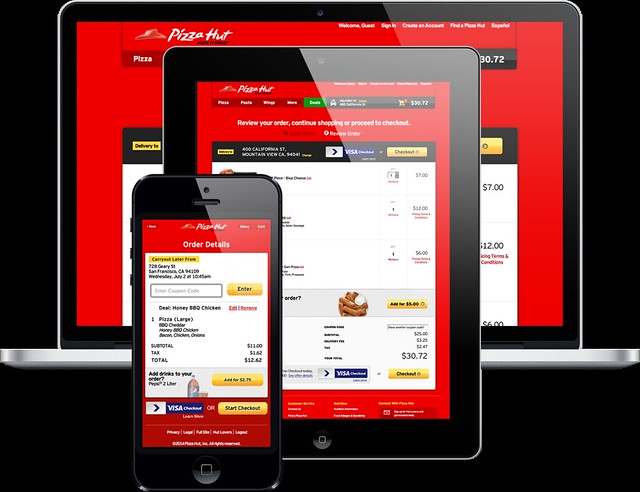 Celebrating the grand opening of its new 500-employee office at One Market in downtown San Francisco, Visa announced the launch of a new product called Visa Checkout.

Visa Checkout, which is a complete overhaul-slash-replacement of V.me, heralds “the future of commerce,” according to Visa, offering a way to pay online and via mobile that is “simpler than any other option.”

According to data from comScore, 43% of total e-commerce spending in Canada is done with a Visa product in 2014 and mobile commerce is growing 56% annually in North America. This is despite severe friction: 68% of online shopping carts are abandoned by consumers before completing purchase, and that number is even higher on mobile, at 86%. This is due to how much information must be manually and repeatedly entered for each purchase, no matter how small.

For obvious reasons, Visa wants to minimize e-commerce friction, and the company—which is connected to 36 million merchants and boasts more than two billion cardholders—believes Checkout is just the product to do so. A consumer creates an account, adding one or more of their Visa cards, and as many different shipping addresses as they choose. This account then securely stores their card data, billing addresses, and shipping addresses. Clicking a Checkout button, like with PayPal, a customer then merely has to select their choice Visa and shipping address, then complete the purchase with a click or tap.

Sam Shrauger, Visa’s senior vice president of digital solutions, says Checkout is a vastly improved version of V.me. “We took out all the bells of whistles,” he says, noting that “every pixel” was optimized for simplicity and ease of use; you don’t get taken to another site and you don’t need to fill in any more information than your password, for two examples. “It’s literally a 10-second transaction from beginning to end. This is the experiene consumers have come to expect in the digital world.”

In 2003 Visa introduced the chip, which allows consumers to insert their card into a reader and enter a PIN instead of sign a piece of paper. In 2010 Visa launched PayWave, which enables customers to pay for goods with a tap. Checkout appears to be the next logical evolution of Visa’s adaption to a faster-paced, convenience-focused, digitally oriented world—one in which Canada leads in terms of adoption. A Visa executive told Techvibes that our nation has adopted the PayWave like no other: in 2013, it accounted for 2.5% of all of Visa’s face-to-face transactions (including all purchases above the tap’s $100 limit); by 2014, that number had skyrocketed to over 9%.

Brad Greene, Visa’s vice president of digital solutions, also told Techvibes that “a meaningful percentage” of the world’s top 100 retailers are already signed up to use Checkout in their e-commerce stores, including Canadian retailers such as Cineplex and Beyond the Rack, suggesting that our country is poised to lead adoption of this technology as well.

“Canadians are increasingly shopping online via multiple devices,” added Brian Weiner, vice president of of product and strategy for Visa Canada, who notes that more than 80% of Canadians aged 18 to 25 now own not just a cellphone but a smartphone. “Visa Checkout provides Canadian consumers a simplified and secure online checkout experience, without their having to continually re-enter payment and billing information, from the Visa brand and an issuer they already know and trust.”

Visa emphasized that Checkout is strictly “the digital form of the card you know and love,” not an e-wallet.

The company also revealed that an SDK is immediately available, offering the potential for e-commerce platforms like Ottawa’s Shopify to integrate Checkout into their merchants’ online stores.