How Data Played a Role in the Toronto Raptors’ NBA Championship

And beating the Warriors really meant beating them at their own game: advanced data analytics.

The Warriors’ front office was an early adopter in data analytics, which has completely changed basketball in recent years. Golden State was one of the first six teams – along with Dallas, Houston, San Antonio, Boston, and Oklahoma City – to install SportVU cameras, which collect data on every player on the court to measure their speed, distance, and possession, and to overhaul their play style to align with what the numbers indicated about shot efficiency.

Like all good analysts, the Raptors observed and learned, and they have their first NBA title to show for it. Here are some of the ways the Raptors leveraged data analytics to build a championship team.

Among the other historical milestones, the Raptors became the first team to win an NBA championship without a lottery pick on their roster, with Leonard – who was drafted 15th overall – ranking as the player selected the highest.

Over the course of the playoffs, they got major contributions from a range of unsung players, including Most Improved Player winner Pascal Siakam (drafted 27th overall), Norman Powell (46th overall), and Fred Van Vleet, a guard who went undrafted and whose 14 points per game and stifling defence on Steph Curry were crucial to the Raptors’ win.

Although much of that scouting success should be credited to Raptors President Masai Ujiri and his staff’s eye for talent, the team has also had help from a data-driven “war room” developed by the iX division of IBM.

The company developed what it says is a “first-of-its-kind” solution that uses IBM Watson cognitive technology to transform the Raptors’ talent evaluation, creating a platform that could analyze data, including team and league statistics, player information, social-media sentiment, and contracts in real time.

“It provides a consolidated, comprehensive view of all player information,” said Farhang Farid, an Associate Partner at IBM iX.

The organization used the platform for the very first time at the 2016 NBA Draft – the same year they managed to snag both Siakam and VanVleet.

In 2017-18, the Raptors won 59 games and finished first in the Eastern Conference before losing in the second round to Cleveland. Head coach Dwane Casey won his first Coach of the Year award for his work, but Ujiri nevertheless decided to make a coaching change – he replaced Casey with rookie head coach Nick Nurse.

It was a major risk and, of course, it worked out. Nurse’s even-keel demeanor and savvy in-game adjustments were integral to the Raptors championship win, and unsurprisingly, Nurse was a believer in analytics long before most.

His first break in the NBA came from the Houston Rockets and General Manager Daryl Morey, a famously devoted proponent of analytics who was once a Statistical Consultant. After Nurse led the Iowa Energy to a championship in the NBA’s developmental D-League in 2010-11, Morey hired Nurse to coach Houston’s developmental franchise, the Rio Grande Valley Vipers.

There, Morey empowered Nurse to experiment with the basketball philosophies he had derived from his own data analysis. Under Nurse, the Vipers won the championship in 2012-13.

“I went to Houston to learn,” he said. “They made it into a laboratory for me. It honestly was like a research project.”

When he got to Toronto as an assistant coach, Nurse brought with him his analytics-informed philosophy: layups and three-pointers were efficient shots, whereas midrange jumps were not.

“We’ve got a pretty strict shot spectrum that we follow,” he explained.

In fact, the Raptors took a mere 12.8 field-goal attempts per game in 2018-19 from the mid-range area (the zone between the key and the three-point line), compared to 20.3 per game prior to Nurse’s arrival. 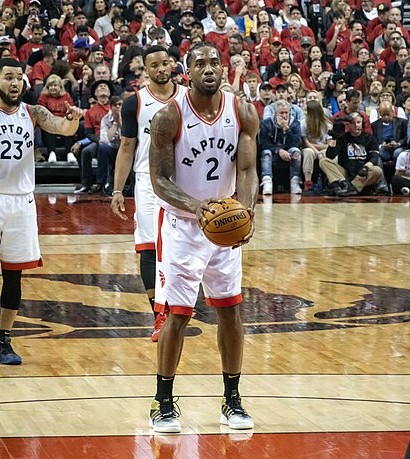 When Kawhi Leonard missed 22 regular season games with no specific injury, but instead to ensure he would be healthy and rested for the playoffs – a strategy memorably termed “load management” – Raptors fans sometimes grumbled about not getting to see the star forward in action every night.

But they certainly weren’t complaining when Leonard hoisted his Finals MVP trophy after a run of dominance that saw the two-time champion score the third-most points in a single postseason in NBA history.

“Me missing games isn’t just to keep me fresh,” Leonard said during the season. “It’s obviously making sure I don’t reinjure something that I was out for last year. (The Raptors medical staff) have been doing a good job of reading images and making sure that I’m improving instead of declining on the health side.”

In fact, load management has everything to do with data.

Although the Raptors have been secretive about how they determined exactly when to sit Leonard, wearable GPS has empowered teams to closely monitor everything about the way a player moves to notice performance irregularities that could indicate an injury. The Raptors’ crosstown counterparts, the Blue Jays, use the popular wearable WHOOP to monitor recovery, strain, and sleep.

There is so much data available with respect to players’ health, some experts say a team Mathematician has become mandatory.

“In one soccer game, including all the players, there’s over a million data points generated over 90 minutes,” said Sports Physiologist Trent Stellingwerff, a member of Canada’s medical staff at numerous Olympics. “And so in team sport, load management is incredibly complex. It’s part science and part interpretation.”

In Toronto’s decisive Game six win over Golden State, star Kyle Lowry scored 26 points, with 10 assists and seven rebounds, making it one of the best performances of the playoffs. It was a vindication for the oft-maligned point guard, but those with a mind for data analytics – including the Raptors’ own management – weren’t surprised by just how effective he was.

If you look at the traditional “counting” stats, Lowry’s averages over the course of his tenure with Toronto are certainly good, but not stellar: 17.4 points, 7.1 assists, and 4.9 rebounds.

Advanced stats, however, do a much better job of capturing his value. For instance, Lowry ranked 15th overall out of all players in the NBA last season in real plus-minus – a newish stat that measures how much better a team is when a certain player is on the floor – after ranking ninth, 10th, and seventh in the stat in the three seasons prior.

In other words, he’s been one of the top 15 most effective players in the NBA for years, but it’s been a well-kept secret – even his team’s own brass took time to understand the level of impact he brings.

“When I first got the job, the analytics guys came to tell me how much Kyle affects winning,” said Ujiri. “They made me understand.”

How Big Data Has Transformed Sports

In a relatively short period of time, big data has become a big business in the sports world. Find out how four sports have been radically changed.